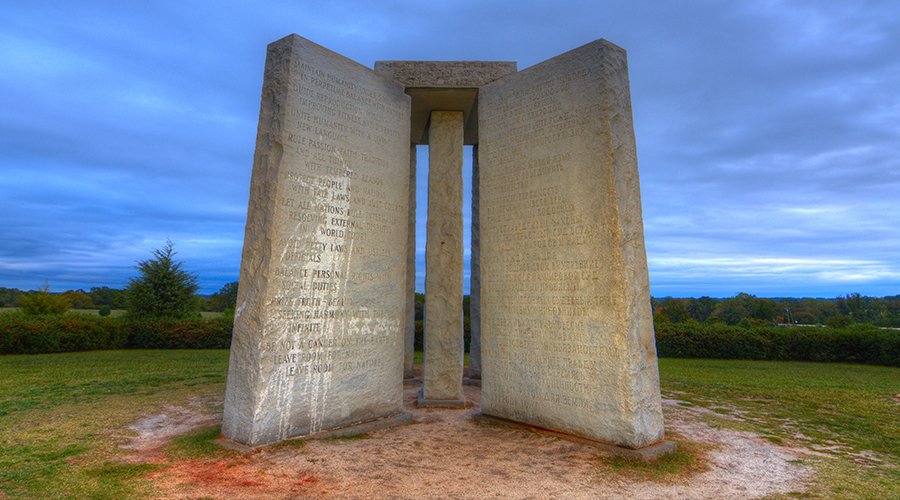 The Elbert County Georgia Sheriff’s Office is investigating a mysterious event at the Georgia Guidestones after a picture was posted to social media showing what appears to be rubble at the site and residents reported hearing a “boom.”

It is not known at this time if the Georgia Guidestones were attacked by a person using some sort of explosive device or if there could have been a small earthquake that partially collapsed the controversial monument, which calls for a New World Order with a vastly smaller global population living “in harmony” with nature.

All we know right now is this: The sound of what could have been an explosion was reportedly heard in the area around 4 a.m. Wednesday, July 6. A photo was posted to Facebook by local resident Chris Smith about 7:30 a.m. showing what appears to be about half the monument lying in rubble on the ground.

The Georgia Guidestones has been referred to as “the devil’s monument,” and sits on what is now county property in Elbert County. It was erected under very mysterious circumstances in 1980 with words etched in the monument calling for, among other things, the genocide of 90 percent of the world’s population. A population of just 500 million, compared to today’s 7.5 billion, is advocated as the proper “balance” with nature.

A video was posted by a local NBC affiliate about 9 a.m. Wednesday that you can watch here. It shows county emergency response teams along with the Georgia State Patrol on the scene, and toward the end of the video a clear shot of the rubble can be seen.

WSGC 105.3 Radio reports that “Hartwell Highway is now CLOSED between Thirteen Forks and Maple Springs Roads. State and local law enforcement and emergency agencies are on the scene at the Georgia Guidestones, which were significantly damaged by an explosion early Wednesday morning. Take caution if traveling on the Hartwell Highway today.”

The guidestones sit on a site 7 miles north of Elberton on Georgia Highway 77 and are often referred to as an American Stonehenge, although some in the Christian community have labeled it the “Devil’s Monument,” or a “monument to Satan” and his minions’ obsession with eugenics, which is seen today in so many of the policies coming out of the World Economic Forum and United Nations.

Please check back as this is a developing story that we will be following all day here at LeoHohmann.com. We are based in Georgia and have reported first-hand accounts about this monument in the past, including our 2017 visit to the site.