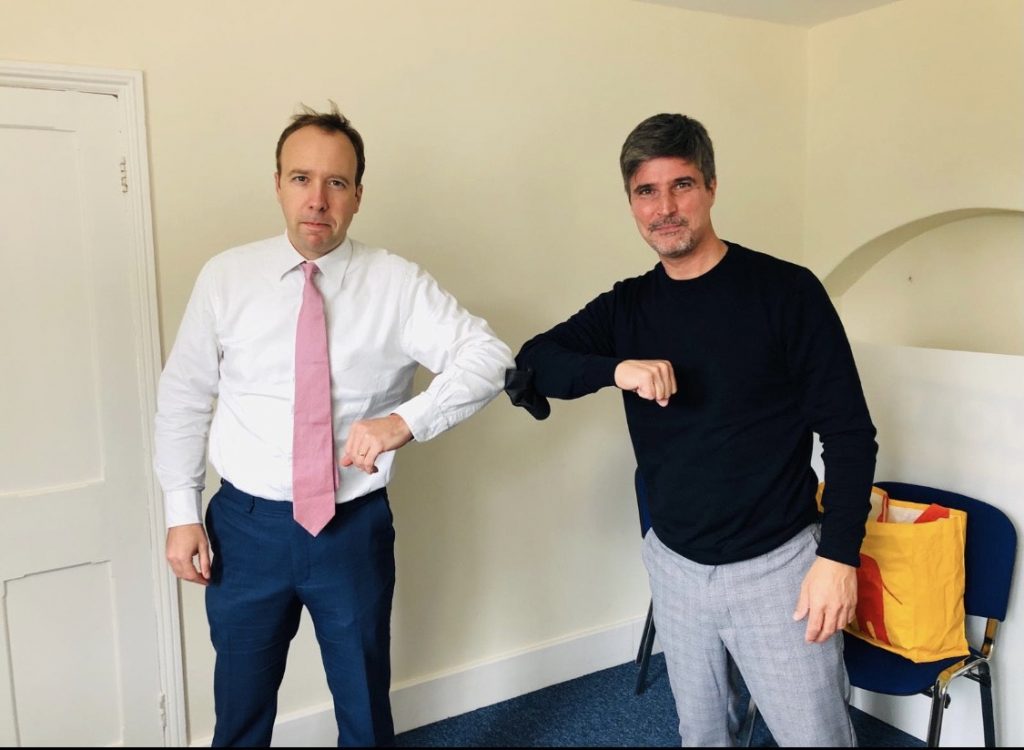 Family man Tony, 54, says: “I’d been campaigning to get CCTV cameras into care homes since 2016 and when my mother Antonia died that May after being horribly neglected in a care home, I stepped it up a notch and wrote to Matt Hancock to discuss the possibility of getting Antonia’s Law legislated.”

At that time, Hancock was appearing on TV almost daily, encouraging people to wear masks, socially distance and scrub their hands. Tony, from East Yorkshire, knew that when he visited Hancock’s office in Suffolk, he’d have to comply with these measures. “I didn’t mind,” he says. “If sticking to the rules was all I had to do to see Hancock one on one, I was more than happy to comply.”

On the day of the meeting, Tony – whose work has included modelling as a Tom Cruise lookalike – brought his lawyer Fadi Farhat (from the Gulbenkian Andonian firm of solicitors) with him to answer any of Hancock’s questions about legalities.

They both donned black cotton face masks. “I wasn’t feeling that great – I was still recovering from a stroke I’d suffered in July, brought about by the stress and upset over what had happened to my mum,” says Tony, who’s since discovered he had a hole in his heart and underwent  major heart surgery in September last year, “but I put on the mask nonetheless. I knew Matt would be wearing one so I didn’t want to get off on the wrong foot by going in with my face on full display. I didn’t want him to think I was the type who’d flout the rules.”

When the pair arrived at Hancock’s office, they were told by his PA to go back and wait in the car. “I noticed she wasn’t wearing a mask but I didn’t think to question it. I just presumed she was exempt,” says Tony.

When they eventually entered the building, the PA made sure they used hand sanitizer, maintained social distancing and that their face masks were firmly in place.

When she opened the office door and ushered them in, following closely behind, they were met with an unexpected sight. “As we entered the office, I couldn’t believe what I saw!” exclaims dad-of-two Tony. “I was expecting Hancock to be sitting on the far side of the room, behind a desk, in full PPE – or wearing a mask or visor at the least – but he wasn’t!”

Hancock walked over to Tony and guided him to one of three chairs that had been positioned to the side of his desk. “He greeted me like an old school friend,” Tony claims. “We sat down and Matt pulled his chair right up close to mine. Then he looked me straight in the eyes and said ‘take the mask off, Tony.’ I was gobsmacked. There he was, maskless himself – this man who’d been instructing the whole country on a daily basis to keep their faces covered pretty much at all times – ordering me to take mine off! He clearly wasn’t worried about catching or spreading anything!”

Tony says he looked at his lawyer, then back at Hancock. “I asked him was he sure and he nodded. So Fadi and I took off our masks. I put mine around my wrist. Hancock then said “that’s better! I can see you now.” It was all very strange.”

Throughout the meeting, Hancock continued to sit close. “At one point, he was so close, I could almost feel his breath on my face,” Tony recounts. “It was odd but the way he behaved actually made me feel very comfortable, like I was talking to a friend. When I was telling him about my mum, I got a bit choked up and Matt actually got a tear in his eye. He’s a good actor.”

The meeting appeared to go well. Hancock said he would back Tony 100% and that he was certain he’d be able to help getting Antonia’s Law passed.

When the meeting was over, Hancock suggested taking some photos. “The PA got up and I handed her my phone,” Tony remembers. “Matt went to shake my hand for the photo, then suddenly said ‘ooh, we’d better not do that if we’re being photographed!’ then he laughed and went in for an elbow bump.”

Three photos were taken. In one, Tony’s mask is clearly visible pushed up around his right elbow.

Tony and the lawyer left in a state of confusion. “We were pleased we’d had the meeting but alarmed by the utter hypocrisy of Hancock. He wasn’t worried about the rules – or the virus – in the slightest and made me realise there was actually nothing to worry about. His behaviour told me loud and clear that either the virus wasn’t as bad as the government were making out or – God forbid – that there wasn’t a virus at all.”

Despite Hancock’s promise of support, shortly after the meeting, he was ‘let go’ from his position as Health Secretary after he was found canoodling with his alleged lover. Tony hasn’t heard from him since.

More about Tony, his mum and his campaign here: