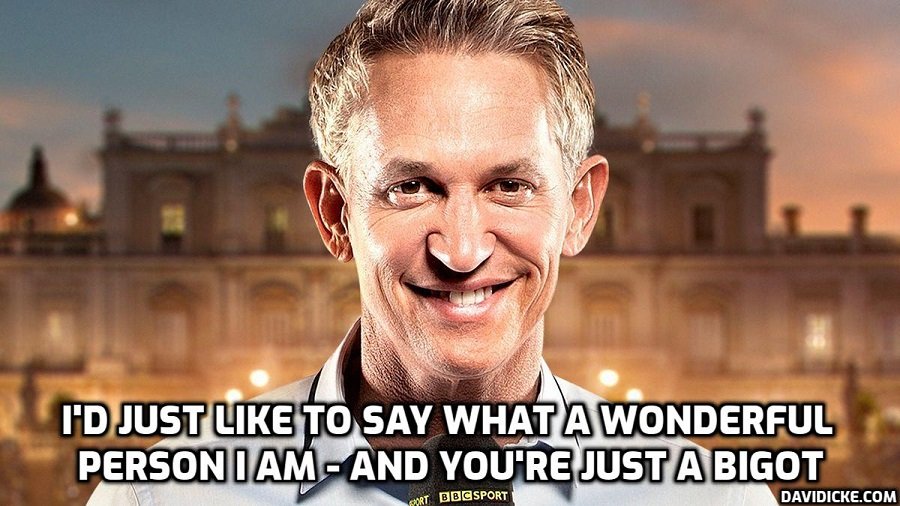 Prince William said this week that the Windrush generation had been ‘profoundly wronged.’

Unveiling a statue at Waterloo station in their honour, he also said that racism remained an ‘all-too-familiar experience’ for black people, and that equality had ‘yet to come to pass’ in Britain.

Too true. Just ask Gary Lineker, Your Highness. The tedious, crisp-munching football pundit has claimed he received racial abuse during his playing career because of his ‘darker skin.’ Excuse me?

This came as a shock to absolutely everyone, because surely on the coffee-shop menu of life, Gary would be down at the whipped-cream vanilla latte end of proceedings, but apparently this is not the case. He was a double espresso man all along, only no one noticed, not even his mum.

Yes, OK. There was that year when Gary was distinctly caramel venti when he came back from a holiday in the Maldives, and I remember at least one Match Of The Day broadcast when an enthusiastic application of panstick made him look a bit Frappuccino. But is this really enough upon which to build a life as an oppressed minority?

The richly remunerated BBC pundit described how — hankies at the ready — he was subjected to racial abuse both at school and during his football career. ‘I was this tiny, geeky kid, with darkish skin and I had pretty much racist abuse, although I’m as English as they come,’ he said.

Pause for a second right there. As English as they come? Lineker implies that being white equates with being English, which is deeply offensive and wrong, as any Windrush descendant would explain if he bothered to ask.

What is irritating is if anyone else said something so inflammatory, there would be a huge outcry, resulting in Mr Lineker being cancelled and his membership of SLICK (Smug Liberal Intelligentsia Condescending Know-Alls) revoked.

Read More: Whatever next! Gary Lineker talks us through his menopausal hot flushes? Somehow, this virtue-signalling jumbo hypocrite gets away with anything