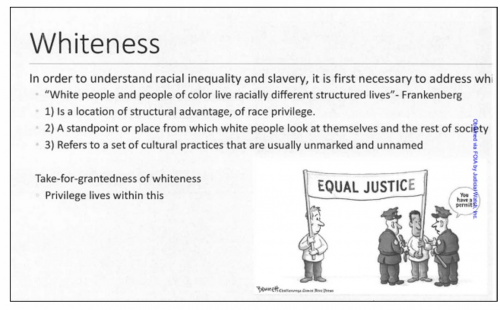 West Point is brainwashing cadets on the supposed evils of “whiteness” and teaching them to use critical race theory to blame white people for all problems in society, newly released Department of Defense documents reveal.

Fox News Digital exclusively obtained the documents from government watchdog group Judicial Watch, which had to sue the military twice under the Freedom of Information Act (FOIA) to get the information.

“Our military is under attack — from within,” Judicial Watch president Tom Fitton said in the press release. “These documents show racist, anti-American CRT propaganda is being used to try to radicalize our rising generation of Army leadership at West Point.”

[…] The documents reveal that the Army officers-in-training are receiving lessons on CRT, which included lessons on addressing “whiteness” as well as the application of CRT when answering questions.

“In order to understand racial inequality and slavery, it is first necessary to address whiteness,” one slide reads.

The slide goes on to claim that “whiteness” is “a location of structural advantage, of race privilege,” is a “standpoint or place from which white people look at themselves and the rest of society,” and refers “to a set of cultural practices that are usually unmarked and unnamed.”

Note, Frankenberg is the late Ruth Frankenberg, who was a pioneer in pushing anti-white CRT garbage back in the early 1990s.