The monsoon season has started in Bangladesh, and the climate Armageddon stories are making their annual appearance in the press. Sky News reports that, “experts say that climate change is increasing the frequency, ferocity and unpredictability of floods in Bangladesh”. Great story, shame about the facts. 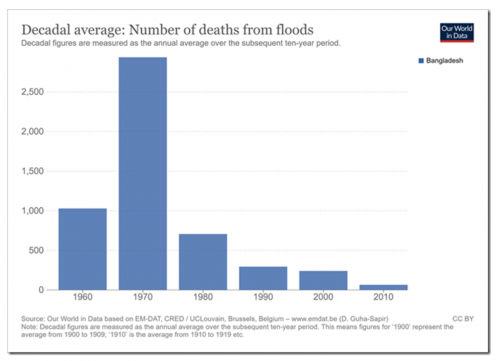 Paul Homewood has published the above graph, which tells its own story. The current flooding is reported to have caused over 60 fatalities and many homes are under water. But deaths from this cause have markedly improved since the 1970s. The country is sited in many geographically fragile areas, and is prone to tropical cyclones. But over 160 million people are sustained by good agriculture, increased manufacturing development and, pre-Covid, annual economic growth of around 6%.

But Bangladesh remains the poster country for climate disaster. USA Today reports that “millions of Bangladeshis face the prospect of becoming internal climate refugees over the next decades”. The international charity WaterAid, in an essay titled “Drowning in Climate Crisis”, states that the country faces a “severe and immediate threat from climate change”.

Read More: No, the Monsoon Rains in Bangladesh are Not ‘Climate Breakdown’