A tracking tool installed on many hospitals’ websites has been collecting patients’ sensitive health information—including details about their medical conditions, prescriptions, and doctor’s appointments—and sending it to Facebook.

The Markup tested the websites of Newsweek’s top 100 hospitals in America. On 33 of them we found the tracker, called the Meta Pixel, sending Facebook a packet of data whenever a person clicked a button to schedule a doctor’s appointment. The data is connected to an IP address—an identifier that’s like a computer’s mailing address and can generally be linked to a specific individual or household—creating an intimate receipt of the appointment request for Facebook.

The Markup found 33 of Newsweek’s top 100 hospitals in the country sending sensitive data to Facebook via the pixel. Data accurate as of June 15, 2022. 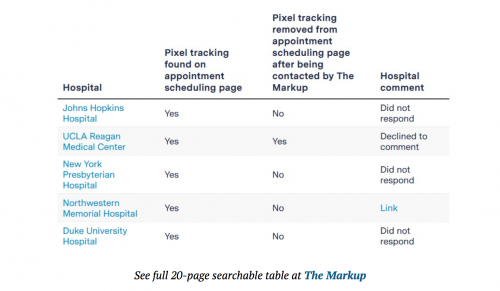 On the website of University Hospitals Cleveland Medical Center, for example, clicking the “Schedule Online” button on a doctor’s page prompted the Meta Pixel to send Facebook the text of the button, the doctor’s name, and the search term we used to find her: “pregnancy termination.”

Clicking the “Schedule Online Now” button for a doctor on the website of Froedtert Hospital, in Wisconsin, prompted the Meta Pixel to send Facebook the text of the button, the doctor’s name, and the condition we selected from a dropdown menu: “Alzheimer’s.”

The Markup also found the Meta Pixel installed inside the password-protected patient portals of seven health systems. On five of those systems’ pages, we documented the pixel sending Facebook data about real patients who volunteered to participate in the Pixel Hunt project, a collaboration between The Markup and Mozilla Rally. The project is a crowd-sourced undertaking in which anyone can install Mozilla’s Rally browser add-on in order to send The Markup data on the Meta Pixel as it appears on sites that they visit. The data sent to hospitals included the names of patients’ medications, descriptions of their allergic reactions, and details about their upcoming doctor’s appointments.