Excess mortality data from Europe, Israel, Singapore and Australia suggest that vaccine effectiveness against death has been overestimated. In Europe and Israel, post-vaccination waves were sometimes as or more deadly than pre-vaccination waves. And countries like Singapore and Australia saw sizeable upticks in excess mortality even after vaccinating a very large percentage of the population.

So while the vaccines do offer protection against serious illness and death, their effectiveness is unlikely to be as high as 90%.

Another interesting country to look at in this regard is South Korea. After containing the virus for the first two years of the pandemic, the country experienced a major outbreak in February of this year. By that point, Korea had double vaccinated 86% of its population, and around 90% of over 80s.

Like Singapore, Korea has one of the world’s highest vaccination rates. At the end of 2021, 83% of Koreans were double vaccinated, compared to only 70% of Britons and only 63% of Americans (see chart below). 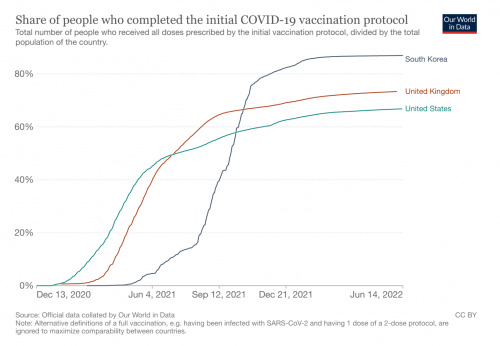 If vaccine effectiveness against death is as high as 90%, you would not have expected to see a large rise in excess mortality when Korea’s outbreak hit. However, there was a large rise. By the end of March, mortality was 67% higher than normal (see below). This is a greater increase than France saw during the spring of 2020!