OpenVAERS, the site which makes data from the U.S. vaccine adverse event reporting system (VAERS) accessible, has added a new feature which neatly illustrates that the high number of reported fatalities from the Covid vaccines is unlikely to be due to an unusually high reporting rate in 2021 and 2022. 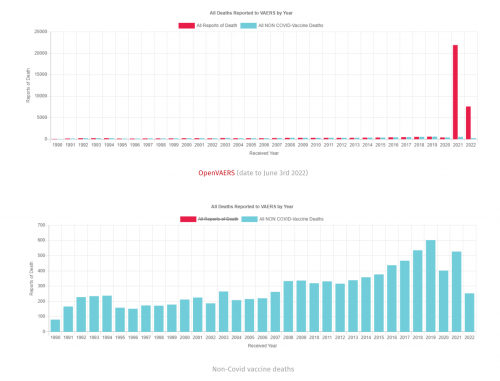 These figures don’t take into account the number of vaccine doses delivered. There were 590 million Covid vaccines doses distributed in the U.S. up to June 3rd 2022 and 13,365 reported deaths, giving a rate of 22.7 deaths per million doses (using data just on U.S. deaths and not deaths reported from overseas). In 2019 there were around 180 million flu vaccinations distributed in the U.S. and 181 reported deaths, giving a reported rate of one death per million doses (on the conservative assumption that all U.S. reported vaccine deaths in 2019 were due to the flu vaccine, which is the main vaccine given to older folk).