The BBC’s green activist-in-residence Justin Rowlatt was in fine form on Monday, kicking off his week-long Radio 4 ‘end is nigh’ climate catastrophe promotions. “We are running faster than ever towards a climate abyss,” he reported, and the Arctic is currently warming faster than the rest of the planet. Sporting the latest fashion accessory for every climate catastrophist – the ‘tipping point’ – he went to report that Arctic warming leads to stalled weather patterns, leading to more “heat domes”, deep freezes and torrential downpours. All of this is said to be “predicted” to become increasingly common and more extreme.

You have to admire the man’s imagination. Let’s hope that a look at the actual science can restore some sanity to the debate. 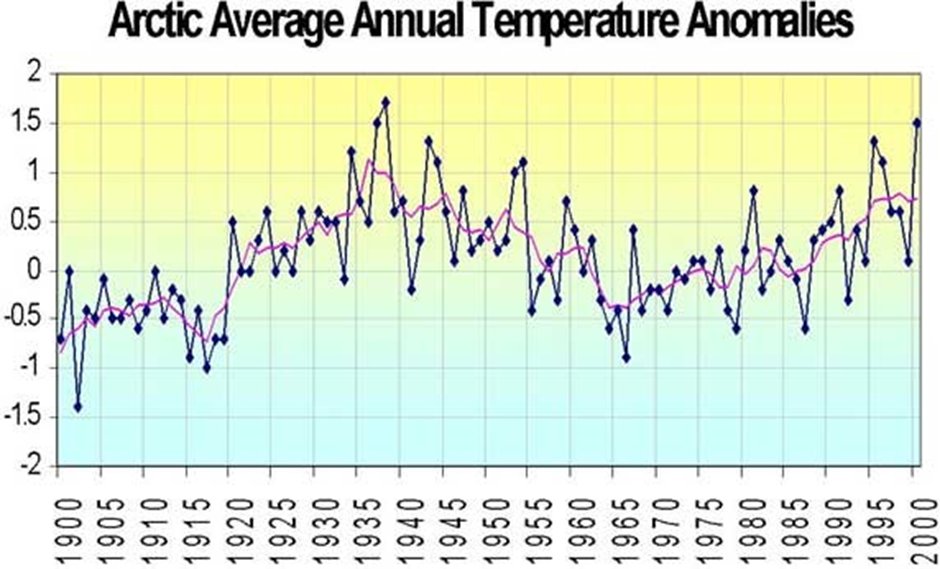 It is true that the Arctic is currently warming faster than the rest of the planet, probably by around two times (the rest of the world has more or less stopped), although Rowlatt quotes the more alarmist ‘three times’. In 2002, researchers from the University of Alaska produced the above graph showing that a similar temperature spike occurred in the 1930s. The current trend line is similar to the warming that occurred at that time, and the last 20 years have probably lifted the line above the 1930s high point. This might be expected, since the planet has also warmed since that date. If Rowlatt’s alarmist claims are to have credibility, one would expect to see jet streams being diverted during the 1930s, weather patterns stalled, roasting heat domes, deep freezes etc. etc. In fact we see no record of dramatic changes in climate trends in the period. A few years later, temperatures started to fall in the Arctic – a fall replicated in the global record with the start of a near 40-year cooling period.

Going back a little further, the Daily Sceptic recently noted that scientists had examined ice core records in both the Arctic and Antarctica and found numerous examples of sharp, short-term temperature change. About 8,200 years ago, a number of scientists identified abrupt global multiple degree cooling over 150 years. Dr. Takuro Kobashi examined the palaeoclimatic records and found a drop of 3°C within two decades, followed by a similar rise over 70 years. Looking even further back in the record, temperatures rose dozens of times by up to 10°C within decades between 80,000 and 20,000 years ago. These are known as D.O. events and are named after the palaeoclimatologists Willi Dansgaard and Hanes Oeschger.

All this is known in the scientific community. As we have also reported, UCL Professor Mark Maslin, a frequent BBC climate guest, tweeted in 2021 that the Earth “is already becoming unliveable”. Climate change, he has also said, “could bring about the end of civilisation”. As a researcher in 1999, however, he noted that most climate change occurs in sudden jumps, “perhaps even a few years”.

Of course, the relentless catastrophisation of the climate owes much to the need to push the command-and-control Net Zero political agenda at all costs. But the more that alarmists cherry pick bad or even just changing weather events, and speculate on increasingly imaginative Armageddon scenarios, the more difficult it becomes to pin carbon dioxide down as the main culprit, the supposedly ultimate climate thermostat device. Diverse weather events, seen countless times in the historical and palaeoclimatic record, seem to owe much more to natural climatic variations. Few links are to be seen in the temperature record and CO2 atmospheric concentrations throughout the course of time. Life has thrived on Earth in the past with much higher CO2 levels, and temperatures have been higher and lower than those we currently experience.

The recent gentle warming in the Arctic, not replicated in Antarctica where temperatures have been static for at least 40 years and probably much longer, has a convincing natural explanation. A great deal of the Arctic is ocean and warming and cooling is in fact predictable. This is because warm water flows into the area from both the Atlantic and the Pacific. These regular events are known as the Atlantic Multidecadal Oscillation (AMO) and the Pacific Decadal Oscillation (PDO). These oscillations pulse warmer waters northwards, leading to periods of lower and thinner ice cover. Of course this ice lies on the sea and its melting does not affect sea levels.