An FBI whistleblower has revealed that ‘dozens’ of investigations into parents voicing their opposition to topics ranging from Critical Race Theory to mask mandates were investigated using a “threat tag” created by the agency’s counterterrorism division – directly contradicting Attorney General Merrick Garland’s 2021 testimony denying that the Department of Justice had been weaponized.

According to a letter from Rep. Jim Jordan (R-OH) and Mike Johnson (R-LA), “We now have evidence that contrary to your testimony, the Federal Bureau of Investigation has labeled at least dozens of investigations into parents with a threat tag created by the FBI’s Counterterrorism Division to assess and track investigations related to school boards.

The letter cites an October 4th memo issued by Garland announcing a concentrated effort to target any threats of violence, intimidation, and harassment by parents toward school personnel.

“We have learned from brave whistleblowers that the FBI has opened investigations with the EDUOFFICIALS threat tag in almost every region of the country,” adding “The information we have received shows how, as a direct result of your directive, federal law enforcement is using counterterrorism resources to investigate protected First Amendment activity.”

Three examples were provided, including at least one member of “Moms for Liberty,” a nonprofit dedicated to helping parents fight for conservative values in the classroom. 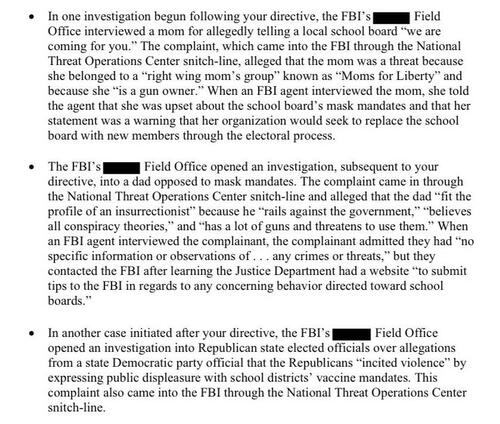 “This whistleblower information is startling,” the letter continues. “You have subjected these moms and dads to the opening of an FBI investigation about them, the establishment of an FBI case file that includes their political views, and the application of a “threat tag” to their names as a direct result of their fundamental constitutional right to speak and advocate for their children.”