On 16 February 2022, a 7-year-old boy in Seattle Washington died from a heart attack with blood clots in his coronary artery and liver.  He died 13 days after being injected with a Pfizer “vaccine.”

He suffered shock and cardiac arrest. He could not be resuscitated and died in the emergency department, APAR TV reported.  His death was recorded on the US VAERS database.

APAR’s article continued: “A CDC-funded study published [7 March 2022] in The Lancet concludes that most of the Covid vaccine-related adverse events reported during the first six months of the U.S. deployment were “mild and short-lived,” despite the thousands of deaths reported to VAERS.”

“Jessica Rose, PhD, attempted to replicate the lancet authors’ findings through independent analysis of VAERS data. Although it filtered the database using three different dates, it could not replicate the results of the Lancet study.”

Dr. Jessica Rose, a Canadian researcher, reviewed the VAERS record for the 7-year-old victim.  On her Substack, she listed his symptoms as shown in the database:

“Atrioventricular block, Blood glucose normal, Blood lactic acid, Brain natriuretic peptide increased and Carbon dioxide decreased. He suffered a cardiac arrest. They tried to resuscitate him but it didn’t work. He died in the emergency department. They said he had arrived there listless and lethargic.” 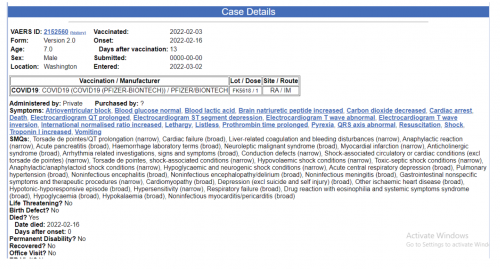