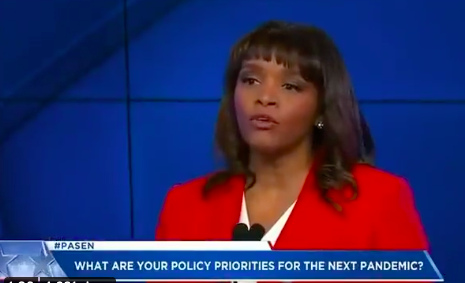 Barnette, who is an African American Army veteran, going up against the Trump-supported Dr. Mehmet Oz of television fame and hedge fund CEO David McCormick among others.

In one of many viral clips from the debate, Barnette told the crowd the Covid pandemic should have taught us what kind of leadership is needed going forward.

The GOP senate hopeful said, “We don’t need people who are globalists in the way that they have lived their lives and rant their business.”

McCormick delivered a generic remark about how his background would help him “understand the global world we live in” but failed to address the World Economic Forum ties.