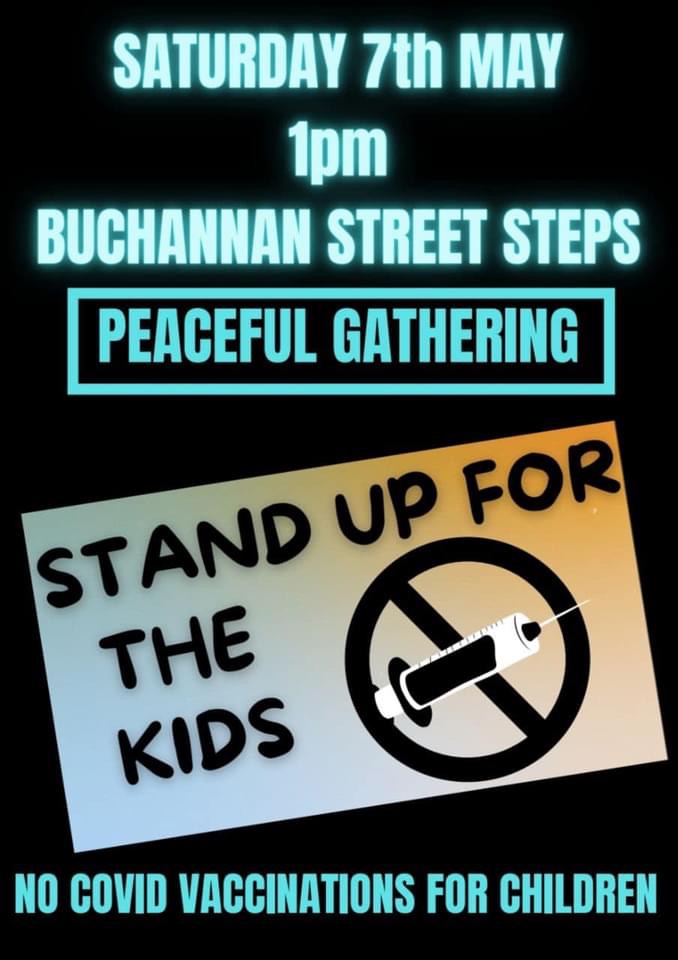 THE over-sexualisation of the school curriculum in Scotland saw many concerned parents and grandparents attend a powerful protest in Glasgow last Saturday.

And activists will again be demanding ‘LEAVE OUR KIDS ALONE!’ when they return to the city centre this Saturday to oppose the drive to give youngsters experimental injections against Covid.

‘It seems our kids are under attack on all fronts,’ said one protester, ‘and none of it is justifiable.

‘Our young don’t need their innocence stolen from them on sexual   matters, and the statistics show that healthy kids have little to fear from covid – so why inject them with something showing an alarming level of serious side effects?’

The gathering, on The Concert Hall steps at the top of busy Buchanan Street, followed tireless opposition by Stef Shaw (AKA Glasgow Cabbie) as well as Richard Lucas of the Scottish Family Party.

In January of this year, Stef Shaw held a public protest outside a Glasgow police station. It culminated in him handing in a complaint of a crime by the Scottish Government against children.

Saturday’s event was opened up by Paisley-based pastor Arthur O’Malley who spoke passionately on adults’ responsibility regarding morals.

He was followed by the main speaker Richard Lucas who left many of the crowd and passers-by aghast at the details of the overreaching nature of the Scottish government agenda.

Please watch the video of Richard’s speech via link below.

Leaflets were handed out showing the disturbing content of sex education material in schools – and many people asked for more so they could warn their own communities.

When the microphone was then offered to others wishing to speak, there was a beautiful moment when a 16-year-old woman took the opportunity to express her dismay and alarm over the sex education she received in her school.

Please watch the video of her speaking via link below.

Further events are planned soon to highlight the continuing ‘state grooming of our children’.

In the meantime, this Saturday will see another highly-promoted peaceful gathering at The Concert Hall steps, 1pm start – to raise awareness of the risks regarding Covid jabs for children.

The event will aim for a huge visual impact on Glasgow’s busiest shopping street, courtesy of massive banners and powerful placards.

Passers-by will also be offered information leaflets and copies of this month’s The Light newspaper with its eye-grabbing front-page headline declaring: ‘Pfizer knew their vaccine would kill’.