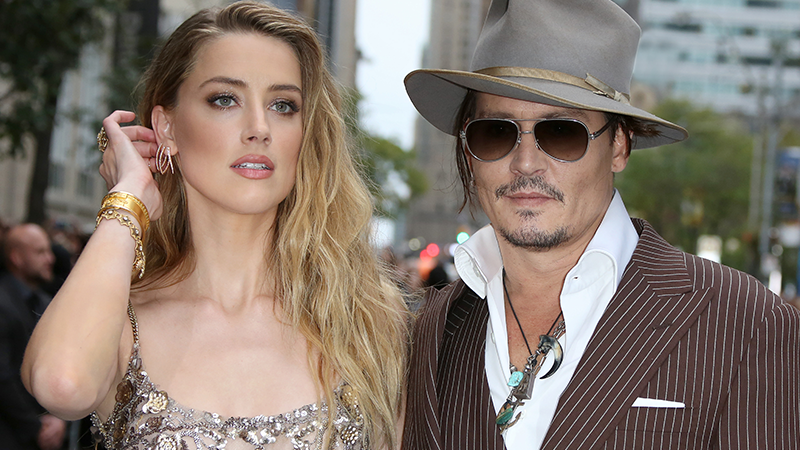 The court heard from Erin Falati, also known as Erin Boerum, the former nurse of Amber Heard who appeared by video deposition.

Under questioning from one of Depp’s lawyers, she walked through her notes of her treatment of Heard, starting with their first meeting in August 2014.

The notes state that Heard ‘reports history of substance abuse including an addiction to cocaine and liquor.’

‘Heard does not smoke but reports she drinks ‘1-3 glasses of red wine a day,’ the notes state.

The notes state: ‘Familial history of substance abuse, both mother and father have abused and become dependent on stimulants.

‘Client identifies as bisexual, and was married to a female partner prior to current relationship.’

The notes add that Heard had been ‘experiencing increased agitation recently and has had several outbursts of anger and rage. Her mood has been labile.’

Asked what ‘labile’ meant, Falati said: ‘Emotional lability is when emotions spin on a pendulum, you see someone sad and quickly transition to extreme happiness, it’s like a pendulum.’

This comes as Heard’s lawyers asked Judge Penney Azcarate to dismiss the case, saying Johnny Depp had not proven his claims.

Judge Azcarate denied the request regarding two statements in the Washington Post op-ed because there was a ‘scintilla’ of evidence a jury may find that they were defamatory. The judge held off ruling on a third statement in the op-ed because the relevant evidence had not been brought in yet.

Read More: Amber Heard’s personal nurse testifies that the ‘cocaine and liquor-addicted’ actress had ever increasing outbursts of rage and was deeply jealous of Johnny Depp’s fame