Whisper it quietly, but Arctic ice is making a comeback. The coverage is now very close to the 1991-2020 average, well above a 2012 low point and higher than 2020. According to the latest report from Copernicus, the EU’s Earth observation programme, the 2021 March sea ice extent was just 3% below the 30 year average. March is the annual maximum extent of sea ice in the Arctic. 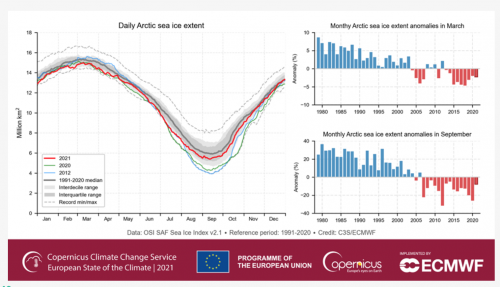 The red line on the graph on the left plots the 2021 record and it can be seen that it is an improvement on recent years. Deviations from the average in March and September shown on the right have both eased in recent years. Of course in historical and geological terms these changes are insignificant, but they are likely to put a dampener on the generally hysterical tone about polar weather encountered in most climate change debate. This tone was set back in 2009 when former US vice president Al Gore reported there was a high chance that the North Pole would be summer ice free by 2013. So far as climate catastrophism is concerned, the Arctic is the gift that keeps on giving. Discussing a crackpot scheme to ‘save the Arctic ice’ by sprinkling it with glass, the BBC Future Planet site noted in 2020 that the area was in a “self-destructive feedback loop”. Much of the ice was said to be “rapidly vanishing”.

Back in less feverish times, the president of the British Royal Society reported to the Admiralty in November 1817 as follows: