Since the first Covid-19 vaccine was authorised for use in the United Kingdom, and administered on the 8th December 2020, there have been hundreds of thousands of adverse reactions reported to the MHRA Yellow Card scheme. But there is one particular adverse reaction which is both concerning and strange, and the number of people suffering from it is increasing by the week – Blindness.

The MHRA Yellow Card scheme analysis print for the Pfizer / BioNTech mRNA jab shows that since the first jab was administered on the 9th December 2020, and up to 6th April 2022, 163 people have reported suffering total blindness due to the injection. Another 6 people have also reported central vision loss, whilst a further 4 people have reported sudden visual loss.

Twenty-one people have also reported an adverse reaction known as ‘blindness transient’ due to the Pfizer vaccine. This is where a person suffers visual disturbance or loss of sight in one eye for seconds or minutes at a time. And a further twenty people have reported an adverse reaction known as ‘unilateral blindness’. This is where a person is blind or has extremely poor vision in one eye.

In total there have been 8,016 eye disorders reported as adverse reactions to the Pfizer jab as of 6th April 2022. 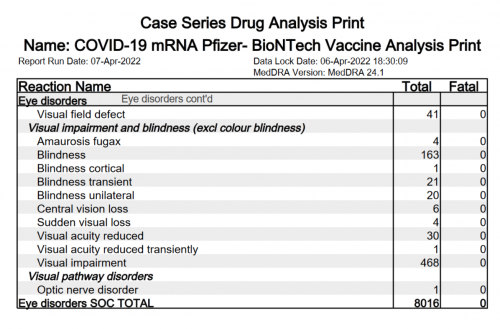 The AstraZeneca viral vector injection has also caused hundreds of people to go blind. As of 6th April 22 the MHRA has received 324 reports of blindness, 3 reports of central vision loss, 5 reports of sudden visual loss, and 29 reports of blindness transient among 14,895 eye disorders reported as adverse reactions to the jab.

Read More: High number of Strokes caused by the Covid-19 Vaccines may explain why so many of the Vaccinated are also going Blind