For months the British public have been deceived with tales that there are just 5 million people in the United Kingdom who have refused to take up the offer of a Covid-19 vaccine. But this is a complete fabrication that has no doubt been used to make those who have refused the jab feel as if they are part of a minority. 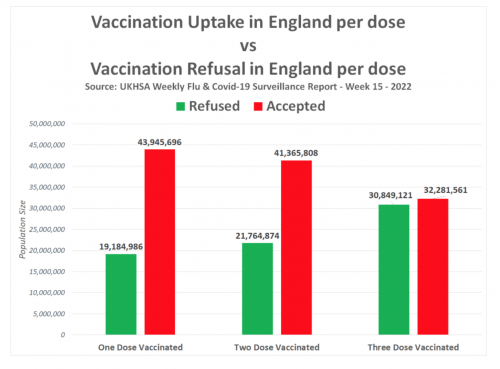 t was back in September that the British public were told there were 5 million Brits who had so far refused the experimental jabs. Sir Patrick Vallance, the UK’s Chief Scientific Advisor and former president of GlaxoSmithKline, announced in a televised Covid-19 briefing that “There are five million or so people who are eligible for vaccines now who haven’t been vaccinated,”.

The UK Health Security Agency replaced Public Health England in the second half of 2021, and is sponsored by the Department for Health and Social Care and headed by Dr Jenny Harries.

Read More: UK Gov. report admits 19.2 million people in England have not had a single dose of a Covid-19 Vaccine, and another 12 million have refused a 2nd or 3rd Dose