Amazon is the latest company to implement a plan to combat soaring fuel costs: charge sellers on its giant e-commerce platform an inflation tax.

To compensate for rising fuel costs, Amazon will charge sellers a 5% fuel and inflation fee that will go into effect on April 28, according to Bloomberg, citing a person familiar with the matter.

Amazon is expected to inform sellers about the fee later today. The added fee comes as inflation remains at levels not seen since the early 1980s, and gas prices are at record highs… Russia’s invasion of Ukraine exacerbated inflationary pressures on companies… 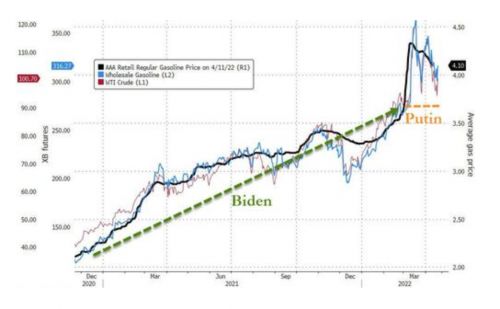 We’re sure once sellers are informed about the inflation tax, there will be an angry response from them. Sellers are likely to pass on the tax to consumers.

As Bloomberg reports, Amazon merchants were already grappling with cost-related fee hikes that took effect in January and averaged 5.2%.

“Amazon already raised fees in January, so sellers will have to raise prices.”

Amazon is far from alone as airlines are raising ticket prices, Uber and Lyft last month added fuel surcharges, and FedEx and UPS have raised prices, mostly though surcharges that vary by package type.