Infant formula is in short supply as US retailers begin rationing. A combination of COVID-19-related snarled supply chains and a major baby formula recall earlier this year exacerbated shortages.

At least 29% of the top-selling baby formula products were out of stock by mid-March, according to an analysis by Datasembly, which tracked baby formula stock at 11,000 retailers.

“This is a shocking number that you don’t see for other categories,” Ben Reich, CEO of Datasembly, told CBS News.

Now America’s second-largest pharmacy, Walgreens, with over 9,000 locations, announced it would ration baby formula. A spokesman for the company confirmed consumers are only limited to three baby formula products per transaction due to “increased demand and various supplier issues.” 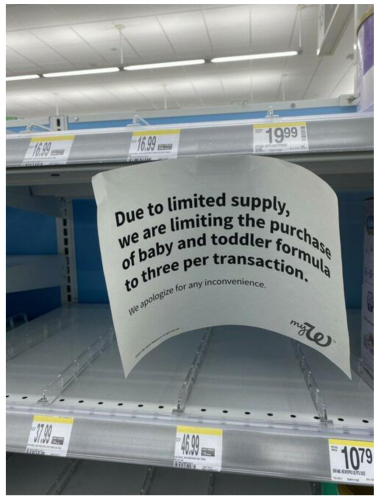 Besides COVID-related shortage of formula and other vital ingredients, packaging woes, soaring freight costs, and labor shortages, a major baby formula recall in January exacerbated shortages. Consumers have noticed shortages at retailers as internet searches for “baby formula shortage” rocket to the highest level ever.