The UK Government has launched a ‘call for evidence to understand people’s experiences of extremism and its impact on social cohesion’. At first glance this may appear that the Government is looking to tackle radicalised terrorists, but as you’ll have seen over the past few years we seem to be rather short of them in the UK.

However, by reading between the lines and taking a look back at previous Government reports published on the subject over the past few years, it’s impossible not to conclude that the UK Government is looking to label any dissenting view to the official narrative as extremist, such as opposition to Covid-19 restrictions, all in order to maintain its power through ‘Groupthink’ and turn the United Kingdom into a communist society without anybody even realising it has happened.

Dame Sara Khan, the Government’s Independent Adviser for Social Cohesion and Resilience, has launched an 8 week call for evidence that will help examine the impact, harm, and response to extremism at a local level. 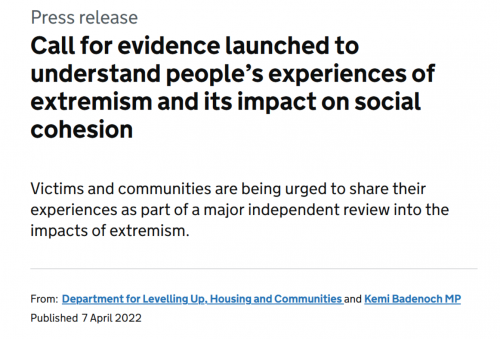 The Government’s adviser wants to hear directly from those who have been targeted by extremists to understand the impact on their lives and the support they received. As well as representatives from local councils and civil society, members of the public are being asked to explain what has gone well and what more could be done. These responses will help her understand the impact extremism is having at a local level and what could be improved to protect and build up social cohesion.