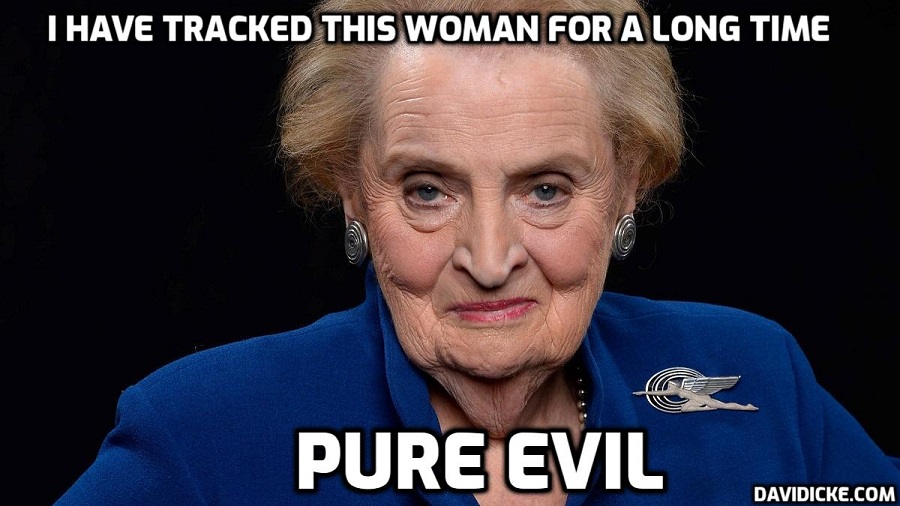 Madeleine Albright- now deceased- was promoted to US Secretary of State after her stint as Ambassador to the United Nations under Bill Clinton, was a member of the National Security Council, served on the board of (CFR) Council on Foreign Relations, and was mentor to Hillary Clinton while trafficking my daughter and me under MK Ultra mind control out of her (OAS) Organization of American States offices in Washington, DC and St. Thomas US Virgin Islands.

Madeline Albright was dedicated to ushering in the globalist slave society agenda referred to as the New World Order by Adolph Hitler, George Bush, Sr. and now Joe Biden. A comrade in arms, drugs, and human trafficking to my owner in MK Ultra US Senator Robert C. Byrd, Dick Cheney, and Poppy Bush, Madeleine Albright pushed the pedophile mind control agenda while eroding US national sovereignty, justice, and freedom under cover of National Security censorship.

Albright’s public record clearly shows her intent to enslave the minds of the masses under a veil of imposed secrecy to those with eyes to see, ears to hear, and soul to know truth of the globalist positions- notorious for censorship- that she held. My 1995 testimony against her, detailed in TRANCE Formation of America and validated by clean members of law enforcement and Intelligence including US Customs and Secret Service, was censored under the 1947 National Security Act.

My daughter, Kelly, is photographed enroute to Albright’s St. Thomas OAS Office where she was used as part of the NWO funding mechanism of child sex trafficking.  Albright’s deeply planted roots of censorship extended throughout the Epstein Island blatant media generated division, diversion, dilution, and cover-up of those high level globalist members sexually assaulting the enslaved.