Could it only be a matter of time before food riots erupt across the Middle East?

A new report Thursday via the United Nations’ World Food Programme (WFP) warns a toxic combination of the conflict in Ukraine, economic disruptions due to COVID-19, and climate volatility resulting in bad harvests, are driving food prices to record highs as fears of shortages flourish.

WFP said millions of Middle Eastern and North African families struggle to buy even the most basic foods to keep hunger at bay.

“People’s resilience is at a breaking point. This crisis is creating shock waves in the food markets that touch every home in this region. No one is spared,” Corinne Fleischer, WFP Regional Director said.

For example, the cost of basic food for a family in Lebanon registered an annual increase of 351%, the highest in the region, followed by Syria with a near 100% rise, and Yemen at 81%. These three countries are incredibly reliant on food imports and prone to currency depreciation. A devastating drought has reduced Syria’s annual wheat production, while Ukraine’s grain exports have ceased.

WFP’s warning reminds us of everyone’s favorite permabear, SocGen’s Albert Edwards, opined two years ago about future agricultural price shocks and how it could spark another Arab Spring.

Russia and Ukraine export about a quarter of the global wheat trade, about a fifth of corn, and 12% of all calories traded globally. With trading disrupted in both countries, soaring prices and shortages are beginning to impact Middle Eastern and North African countries. 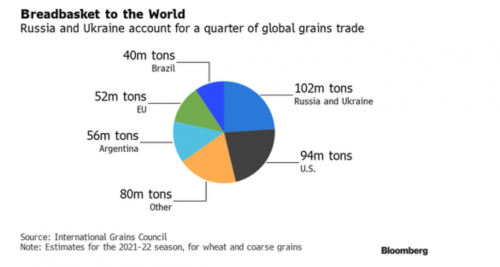