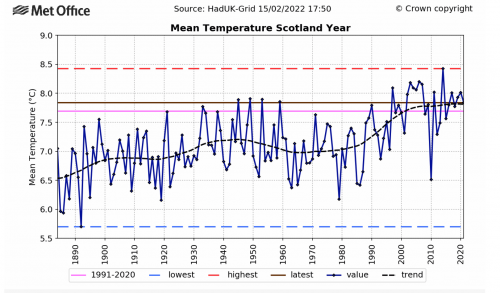 Always keen to stay one step ahead of the English, Nicola Sturgeon has set the Scottish Net Zero target at 2045, five years ahead of England’s. No longer can anyone pretend that the climate catastrophe is some abstract event, the Scottish First Minister told the recent COP26 conference in Glasgow. “You only have to see the increasing numbers of severe weather events around the world to know that the climate, and the planet is changing rapidly”, she added.

According to the Met Office graph (above), the temperature in Scotland has stalled and has barely moved for almost 20 years. Indeed Scotland seems to be leading the way in plateauing measurements. Satellite data show that the global temperature pause is almost eight years long, although, as in Scotland, the start of the slow down can be dated before 2000. Of course, Sturgeon is never going to be short of a bit of bad or severe weather somewhere in the world to point a finger at. And, needless to say, climate change must also be seen as a “feminist” issue.

But old scare habits die hard. Last week, the Government-sponsored Climate Change Committee (CCC) issued some nannying nonsense about tackling climate change in Scotland, and stated that the process had “stalled”. The chairwoman of the CCC adaptation committee Julia King, Baroness Brown of Cambridge, told the BBC that the average temperature in Scotland “has risen by 0.5°C” over the last 30 years. According to the Met Office graph, the figure is around 0.4°C. In addition, King’s figure is clearly cherry picked, since most of the rise occurred in the last century.