One of the core staples of the past 40 years, and an anchor propping up the dollar’s reserve status, was a global financial system based on the petrodollar. This was a world in which oil producers would sell their product to the US (and the rest of the world) for dollars, which they would then recycle the proceeds of in dollar-denominated assets and, while investing in dollar-denominated markets, explicitly prop up the USD as the world reserve currency. All of this would support the standing of the US as the world’s undisputed financial superpower. 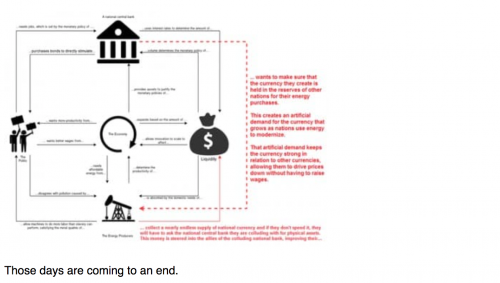 One day after we reported that the “UK is asking Saudis for more oil even as MBS invites Xi Jinping to Riyadh to strengthen ties”, the WSJ is out with a blockbuster report, noting that “Saudi Arabia is in active talks with Beijing to price some of its oil sales to China in yuan,” a move that could cripple not only the petrodollar’s dominance of the global petroleum market – something which Zoltan Pozsar predicted in his last note – and mark another shift by the world’s top crude exporter toward Asia, but also a move aimed squarely at the heart of the US financial system which has taken advantage of the dollar’s reserve status by printing as many dollars as needed to fund government spending for the past decade.

According to the report, the talks with China over yuan-priced oil contracts have been off and on for six years but have accelerated this year as the Saudis have grown increasingly unhappy with decades-old U.S. security commitments to defend the kingdom.

The Saudis are angry over the U.S.’s lack of support for their intervention in the Yemen civil war, and over the Biden administration’s attempt to strike a deal with Iran over its nuclear program. Saudi officials have said they were shocked by the precipitous U.S. withdrawal from Afghanistan last year.