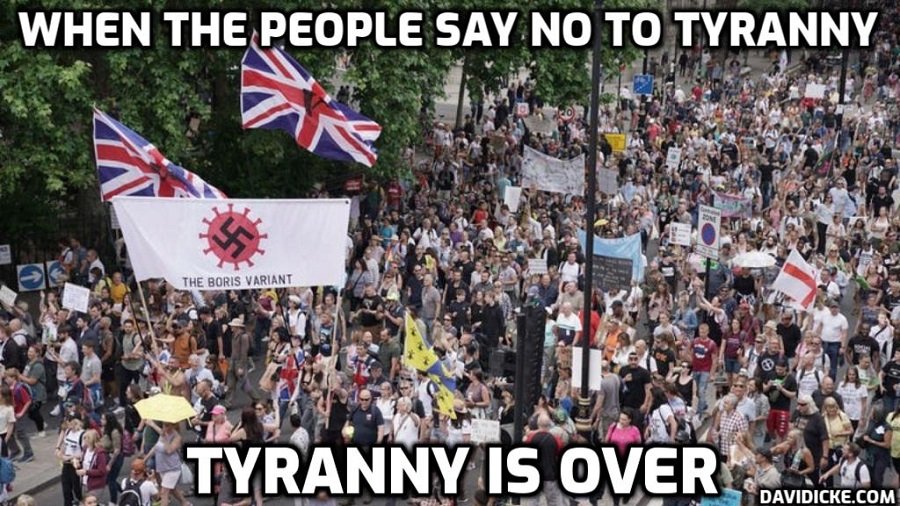 It is obvious now that the alternative media pose the biggest threat to the stranglehold the deep state have on humanity. They have the one weapon that could eventually bring them down – the truth.

The irony is that it is the cabal’s complete control of the mainstream media that will lead to their downfall. The continuous lies and propaganda became more and more obvious during the covid scam, driving many people to alternative news sites where they eventually discovered that what the corrupt media had been telling them on virtually every subject for years was demonstrably false.

9-11 had awakened many people to the truth but the covid plandemic awakened many millions more. The absurdity of the lies and the overtness of the propaganda and fearmongering was so evident, even the most ardent doubter of conspiracy theories began to see the media for what they are. To vast swathes of the population they are now viewed as the propaganda wing of the globalists; a bunch of sycophantic minions addicted to spreading fear and division on behalf of their globalist masters.

So ridiculous and blatant where they with their covid deceit that the entire covid con crumbled around them under the weight of their own lies. But don’t be fooled. This is just the end of one terror campaign waged against the populace. The new one is now the threat of nuclear war with Russia.

The insane hysteria by the Western media and governments over the Ukraine situation parallel exactly the hyperbolic, fear-porn they spewed out regarding the covid scamdemic. With covid it was the unvaccinated that were a danger to society and they should have their rights removed and not be allowed to go out into the public domain. Now the Russians are a threat to society and they should have their property and money confiscated and be deported from the country.

We now have a situation where Russian ballet companies are being banned from theatres, Russian Paralympic athletes are prohibited from competing in the winter Olympics, a Russian billionaire has had his assets seized which include an English football club that he owns and school children of Russian parents are being harassed by their peers because a bunch of baying MPS with torches and pitchforks, and abetted by the bloodthirsty press, want to have their pound of Russian flesh because they are supposedly outraged by Putin’s human rights violations. These are the same people who openly declared their support during covid for the removal  of our right to go shopping, go the pub, go to the restaurant, visit our family members, hug our grandmothers or visit a dying relative in hospital. The same people that wanted to lock us up harder, faster and for longer in case we might give someone the flu. The same people that wanted to refuse entry into shops, bars, restaurants and cinemas to anyone that refused to be vaccinated and supported the idea of forcibly vaccinating people against their will with the toxic jab. Lest we forget, this was the same media that wholeheartedly supported the war in Iraq, the bombing of Syria and Afghanistan and the murder of Colonel Gaddafi and destruction of Libya and made no mention at all of the human rights of the millions of people that died because of these actions. They watched the rockets rain down on Iraq with pride and awe as if they were witnessing some great patriotic pyrotechnic display with not a word about the incinerated and eviscerated Iraqi bodies that resulted from it.

They scream that we must protect the borders and democracy of a sovereign state and yet remained silent when that very same state had their leader overthrown when the West executed one of their many colour revolutions in 2014. Where was the outrage then? The same people that wail about the lives of the Ukrainians now are the very ones that have caused the current threat to the same Ukrainian lives by ignoring the 2014 coup and the West and NATOs encroachment on Russia’s borders.

The very same politicians and media that said anyone that voted for Brexit was a xenophobe now want to expel anyone simply because of their nationality. Law abiding Russians must be shipped back to where they came from but it’s an open invitation to all Ukrainians to enter the UK without any checks whatsoever, completely ignoring the fact that Ukraine is officially the most corrupt county on the planet and has a well-known Nazi extremist problem. But, as Facebook/Meta has given the all clear for the Azov battalion to post their propaganda on their site, they are obviously the good kind of Nazi.

The fact is that our government and media have terrorised us for the last two years with covid lies and will continue to terrorise us unless they are put behind bars where they belong. For this to happen we must never forget what they have done to us – the elderly killed in care homes through neglect and the illegal placement of DNR notices on them, the people that died because they couldn’t get a hospital appointment because the hospitals were allegedly full of covid patients when, in reality, they were half empty. We must never forget the people who died in hospitals and care homes alone because these sick psychopaths wouldn’t let their relatives in to comfort them or the young people who took their own lives because they couldn’t bear the loneliness of lockdown. We must never forget all those who are now suffering from severe mental health issues and those that lost their livelihoods.

Do not let what is happening in Ukraine detract us from us from what they have done to us. They denounce Putin as a terrorist and yet the political and media psychopaths fit the very definition of terrorists as described by the UK Terrorism Act 2000 which says an act of terrorism is –

“(1) an actual or contemplated use or threat of action involving serious violence against a person, endangering a person’s life or creating a serious risk to the health or safety of the public or a section of the public.”

To quote the Terrorism Act again –

(4) the use or threat of action is made for the purpose of advancing a political, religious, racial or ideological cause.”

Quite clearly the hysterical covid lies and the threat of a criminal conviction for non-compliance with the covid restrictions  were designed to the intimidate the public and it was clearly done for an ideological cause – the World Economic Forum and globalist cabal’s Great Reset.

But the government and media are not only terrorists by definition but also extremists. The Government has defined extremism in their Prevent strategy as: “vocal or active opposition to fundamental British values, including democracy, the rule of law, individual liberty and mutual respect and tolerance of different faiths and beliefs.”

I would suggest that locking people in their homes, shutting down businesses, preventing people from visiting family members, trying to force dangerous vaccines on people and arresting people for sitting in their own front garden constitutes active opposition to the rule of law and individual liberty. So, these same people who are shrieking about human rights in Ukraine are the very epitome of extremists who vehemently advocated for the destruction of human rights in their own country.

Covid is over, now it’s Russia. After that it will be the fake Climate Crisis – another reason to terrorise us all. That’s why they will target the alternative media, censoring everyone that dares tell the truth because the truth will be their downfall. They will never stop until we stop them. They must all be held to account or they will terrorise humanity forever. Spread the truth. Help end their reign of terror.