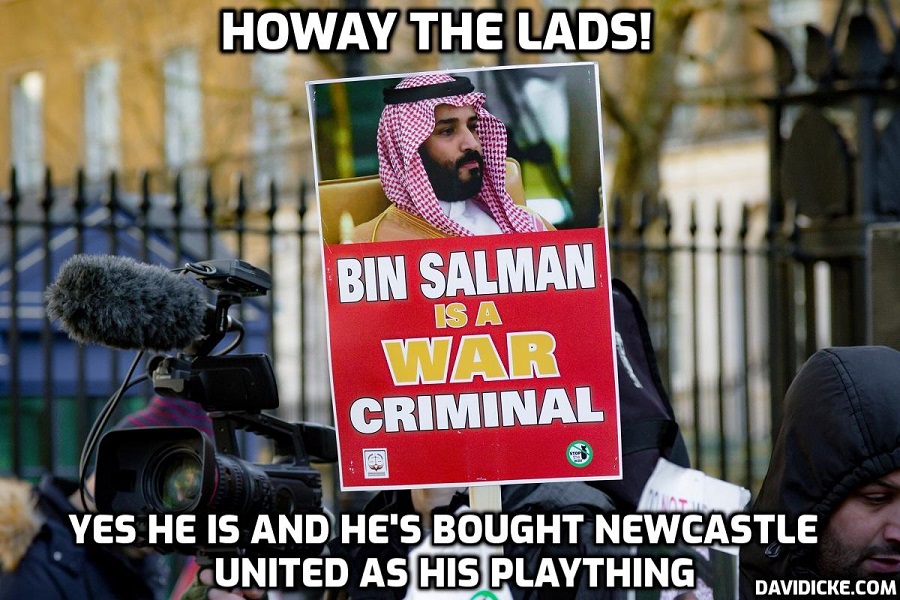 It was a standoff of the potentially undesirables today at Stamford Bridge as Newcastle fans flew a Saudi flag and Chelsea fans displayed a Roman Abramovichbanner.

Yesterday the Saudi regime executed 81 men, while Abramovich was sanction by the government over his ties to alleged war criminal and Russian tyrant Vladimir Putin.

Newcastle fans seemed more concerned with the money their brutal owners have pumped into the club, chanting ‘We’re richer than you’ at Chelsea supporters.

Chelsea fans outside the ground voiced support for their owner of almost 20 years, asking for politics to stay out of football, even as a brutal war that has seen Russian cluster bombs hitting schools and hospitals raged on in Ukraine.

The Chelsea team also wore shirts with Three and Hyundai on them even though both companies have said it is stopping sponsorship with the club because of the war in Ukraine.

Those lost sponsorship deals mount to a whopping £170million.

Read more: Babes in arms … Newcastle fans chant ‘We’re richer than you’ at Chelsea supporters and fly Saudi flag at Stamford Bridge a day after Saudi regime executed 81 as Roman Abramovich banner in Russian colours continues to fly at Stamford Bridge. And a few people can’t control the world? DODDLE