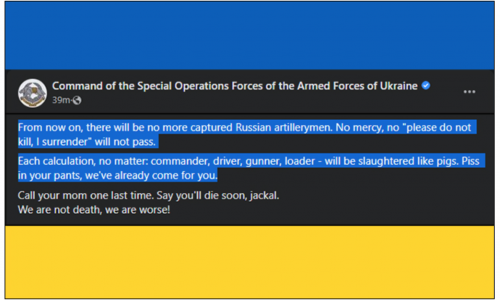 Ukraine’s Special Operations Command announced Thursday on Facebook that Russian soldiers who try to surrender henceforth will be “slaughtered like pigs” while they’re begging for mercy.

Ukraine’s special operations command just issued a warning to Russian soldiers that they will not be taken prisoner and will be “slaughtered like pigs” without the option of surrendering.

That is public admission of a war crime. pic.twitter.com/fFVwkKu4Ib

The SSO Brotherhood of Ukraine sends its greetings to the Russian artillery! We congratulate you: after you bombarded our peaceful cities, our relatives, children, loved ones – you, worms, became our number one target. We explain to you, Vanki: you seem to be far away and shoot at targets you can’t see. You don’t see little children, old people, homes, kindergartens, schools and hospitals – all these are just goals for you. Pressed, flew, got hit – f*cked, right guys? Now look, worms: you don’t see your goals and you seem to be relieved. But believe me: it will never be easier for you scum. We already have the information about you. And if it is not for someone else, then it is a matter of minutes.

From now on, there will be no more captured Russian artillery. No mercy, no “please don’t kill, I surrender” will be getting away. Every calculation, no matter: commander, driver, guide, charger – will be slaughtered like pigs. Tie your pants up, we’ve already come for you. Call your mom one last time. Say you gonna die soon jackal. We are not death, we are worse!