The latest satellite temperature data for February show no movement from the 30-year average. The news is further evidence that global temperatures started to run out of steam nearly two decades ago. The highly accurate satellite measurements also reveal no global warming for the last 88 months. 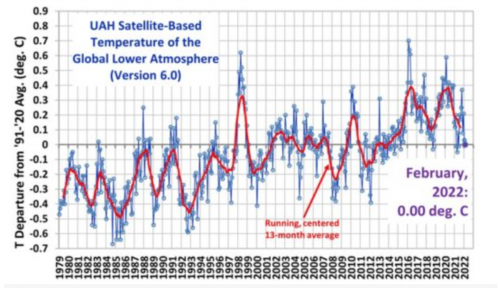 The data is compiled by Dr. Roy Spencer from the University of Alabama, who was kicked off Google Adsense recently for publishing “unreliable and harmful claims”, e.g. the latest satellite data showing global warming has ground to a halt. The move demonetised Dr. Spencer’s monthly satellite update page by removing all Google-supplied advertising. Google says it will ban all sites that are sceptical of “well established scientific consensus”.

Dr. Spencer has been compiling satellite temperatures for 43 years and has received awards for his work from NASA and the American Meteorological Society. He is currently working with NASA on the Advanced Microwave Scanning Radiometer flying on the Aqua satellite.

Read More: More Inconvenient News on Global Temperatures From the Graph that Google Doesn’t Want You to See