Brave critics of Vladimir Putin living in Russia today spoke out to accuse him of wrecking their country and ‘starting World War Three’ as protesters took to the streets of more than 50 cities despite the threat of being charged with treason.

Thousands marched amid claims Putin may have ‘overplayed his hand’ with an invasion of Ukraine his critics hope will sink him – and some were interviewed by the foreign press including the BBC despite knowing the Kremlin would be watching.

One woman broke down and said she ‘can’t stop crying’  while another protester said: ‘Most Russians don’t support this. It’s horrible’.

While the protest numbers in a country of 180million were in the low thousands, their bravery has been hailed around the world because of Putin’s policy of smashing protests and jailing his enemies.

They also spoke out despite facing near-certain arrest and imprisonment because the Kremlin says ‘negative comments’ about Putin’s invasion of the Ukraine would be treated as ‘treason’. And despite this Facebook was awash with Russians angry about the war.

Dmitry Muratov, the editor of Russia’s only anti-Putin newspaper who won the 2021 Nobel Peace Prize, says they will publish the next version of Novaya Gazeta in two languages ​​- Ukrainian and Russian – declaring: ‘We do not recognize Ukraine as an enemy’

Branded ‘Russia’s bravest man’ because of his vocal opposition to Putin, told the BBC that the day of the invasion brought ‘shame’ and would go down as the day ‘Russia’s future was taken away from it’, adding: ‘Our peace-loving Russian people will now feel the hatred of the world because we are starting a third world war in the centre of Europe.’  He added: ‘Only the anti-war movement of the Russians can save life on this planet’.

Read More: Has Putin overplayed his hand? Brave people of Moscow dare to speak out against Ukraine invasion amid protests across country2 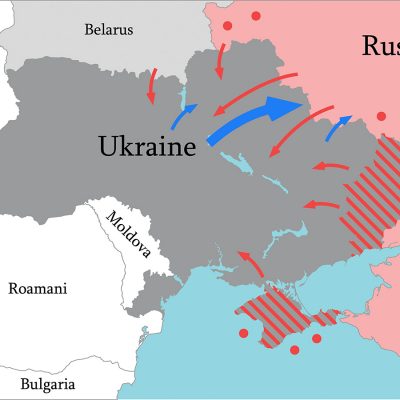