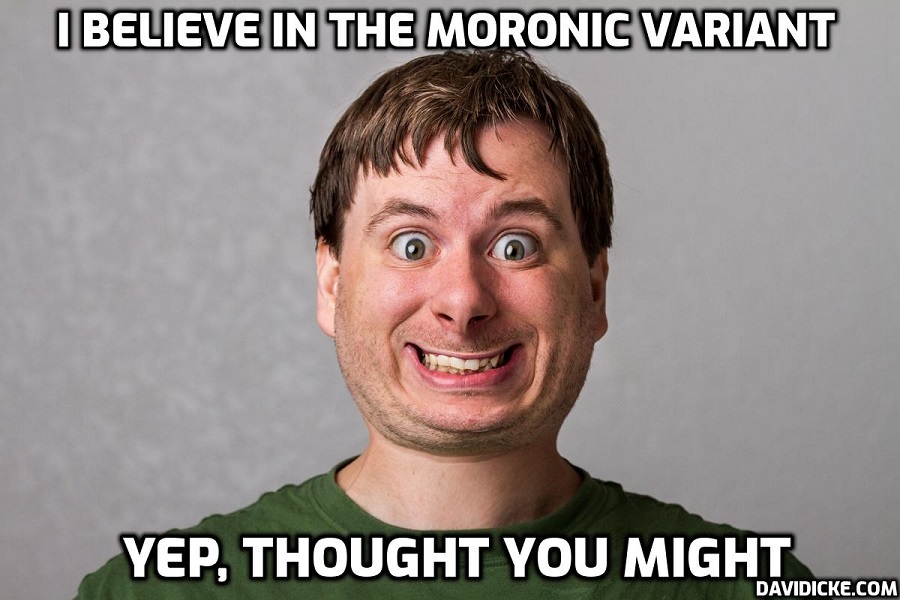 It was perfect. Made my day.

Aside from all the cursing and accusing, this moron claimed I had no right and no standing to DISBELIEVE scientists who work in ultra-secret labs where they assert they’re discovering new viruses.

I have no standing because I don’t have the degrees.

Of course. A degree is an automatic certification of competency and honesty.

Only another person with those credentials can step up to the plate and question the experts in their labs.

THAT premise and that idea produces fascists.

That moronic and venomous notion produces fascists who are willing to fight to maintain the Police State.

That desperate clinging to AUTHORITY is why the war for freedom is forever.

That level of stupidity is why Fauci, whose sole reason for being is—“I’m on television”—can attract an army of worshipping idiots—and can lead the nation into a trap where slavery is supposed to be salvation.

The poisonous moron who sent that email is a representative of all the rubes and yokels and marks who are ready and willing to cancel centuries of the struggle for freedom.

The poisonous moron who sent the email would go to her DOCTOR, the competent one, and if he said she should have her leg cut off, she would salute and say, “How soon can we schedule it?” And she would be proud.

I salute her. She is willing to expose herself as a portrait on the wall; a portrait we can point to and say, “This is the key. This is what MKULTRA looks like. This is self-made mind control.”

Given the chance, she would have trained Hitler Youth.

Of course, she doesn’t know that. She thinks she stands for truth and justice.

And that’s the brilliance of it. The reversal. The day suddenly turns to night. Making life into death.

Every human has experienced this twist, on some level. Every human has found himself a buck private at the back of a line toting a gun and taking orders and—is then jolted into: WHAT AM I DOING HERE? HOW DID I GET HERE? I’M ON THE WRONG SIDE.

But some are never jolted. They march on. They keep obeying the commanders who have the DEGREES and the CREDENTIALS.

They say, “I’m marching to save lives.”

They say, “If you doubt the commanders, you’re killing the innocent.”

But they’re the ones firing their weapons. And holding the syringes and the needles.

And I want to say to my readers: For the past two years, many of us have been exposing the whole rotten edifice of the medical cartel as it’s NEVER been exposed before. And millions of people are seeing the rot and the collapse and they’re smelling the stench rising from the earth.

And so WE CAN EXPECT, and should even take as a positive sign, little fascists jumping out of their holes and accusing us OF HAVING NO STANDING AND NO RIGHT to disturb the edifice.

Would I prefer this struggle to be conducted like a charm school? I would prefer an entirely different world. But we’re here now with this one, so we fight.

More little creatures will try to stick their fangs in us; but we don’t back down. We use their blind stupidity as fuel for our fire.

In that regard, nothing had changed in the ten-thousand year war for freedom.

The more I write, the more I’m liking this woman who sent the poisonous email. She’s got will power. She’s burning her taper closer and closer to the end, where it turns into a large ash and falls off into the void. And then…silence. Great darkness.

I believe we’ve all been there as well.

How did we take ourselves out of that place?

Each person has his own answer.

I side with those who realize they invented their way into the Dark, and they’ll invent their way out of it.

Regardless, when the taper has burned out, you really don’t want to be stuck with the idea that only an official credentialed authority can reach down and give you what you need.

Because, who shows up with official certifications? The screw and rack turner in the Spanish Inquisition. The mass murderer of peasants in 1930 Russia. The Jew and Gypsy killer in 1943 Germany. The Land Reform killer in 1950 China. The killer of millions with heralded medical drugs.

The de facto Medical President who locks down a whole country and carpet-bombs the economy and fronts for an injection that maims and murders.