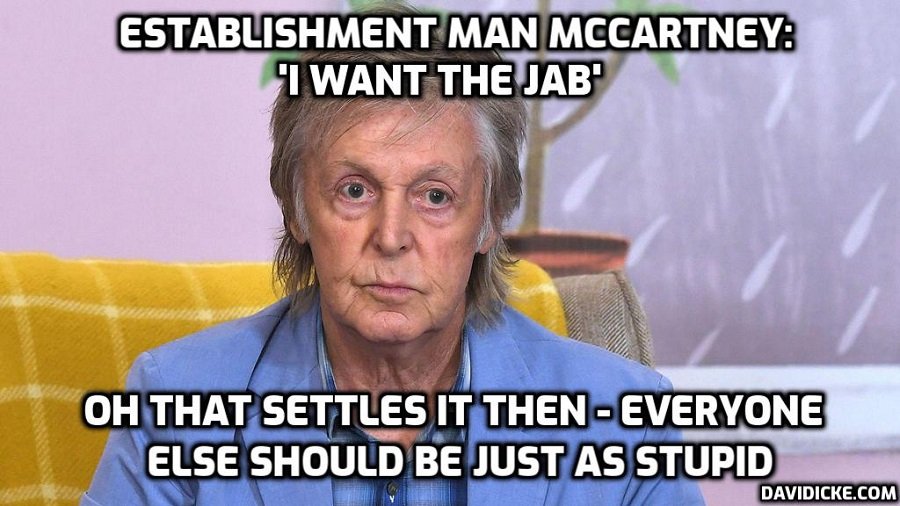 Well, that’s it then. You can tell Paul dug deep to do his research on the injection. Be cool.

“The beanie- and face-mask-wearing 79-year-old rocker wrote this message on Instagram, while signing off as ‘Paul,’ underneath a picture of himself getting his COVID shot from a health care professional on Monday (Aug. 2).”

As opposed to getting his shot from a health care amateur, or a shoe salesman?

Sir Paul has obviously bought the whole enchilada. Virus spreads, infects, makes people sick and kills them, get tested, isolate if necessary, lock down a whole country if necessary, the vaccine will stop the virus in its tracks, we’ll be OK.

No need to look at contrary evidence. The official doctors and the political authorities know what they’re doing.

Obey. Comply. Was that always the secret message of Paul’s music, hidden amidst the vinyl grooves?

Since God knows when, famous Brits have issued consoling messages to the lower classes. “We’ll get through it. We’ll pull together.”

It turns out lots of famous ones aren’t doing any of the pulling.

A reasonable person would realize a vaccine mandated for the whole population should be scrutinized down to it core. It’s cool, and we’ll get through it, don’t cut it.

A breezy cavalier attitude is a sign of a mental midget.

I wonder whether a hypnotic medical blind spot will turn up on a brain-scan. “You see this dark area, Paul? The neurons aren’t firing. When I shine this ray of light at your skull and it penetrates and hits that area, a message pops up: ‘Don’t think. The doctors know everything’. If I were you, I’d get that checked out. But not by a doctor.”

Judging from his Billboard quote, Paul seems to realize he’s being enlisted by the National Health Service and the government to assure the public the vaccine is safe; and he’s willing to go along.

If he were working a steady job, and a SINGER told him it was cool to take the shot, would he go along?

Having amassed fame and fortune, he’s not able to imagine that reverse-scenario anymore. That’s not the fault of his career, his composing, his singing, or his earning pounds and dollars. It’s his fault for surrendering to his elevated status.

He wouldn’t admit it, but he’s detached himself to a sufficiently remote area, from which he can shrug and support a government edict affecting millions of people without a second thought.

His stupidity is towering.

TWO: Howard Stern is a bunch of ugly sticks glued together with dried semen from one of his old wet dreams.

Once upon a time an abject failure as a broadcaster, he glimpsed a possible way out of Doom by taking on the role of psychological pornographer.

He’d assume everyone was obsessed by sex, and he’d force their inner dog to drool when he rang the bell.

Now, from a political perch, he’s decreed that all unvaccinated people should be locked in their homes and die.

That’s his style. Cut to the extreme chase. And also: see nothing, say something.

The mental midget status applies to Stern in spades. He knows zero about vaccines. He listens to the official doctors and the federal government like the kind of good little boy he hates.

As a young awkward schlub, he decided to rebel and burn down normal people by illustrating they were nothing more than prurient fish waiting to be shot in a barrel.

It was an easy choice. Once he found his radio style, he opened fire. His ratings soared; fame and fortune arrived.

He knows his success is nothing to be proud of. But success is all he has to hang his hat on. So he pretends it means something about his character.

It only means he’s one more person who’s tapped into a lowest common denominator and found dollars.

If Howard Stern tells you, you need to get vaccinated, you pretty much know it’s the wrong thing to do, on that basis alone. Directing people down bad alleys turns out to be one of Stern’s skills.

He possesses a high degree of intelligence. He’s used it to recreate himself as mental midget. The only interesting moments in his career arrive when he laughs at himself because he knows what he’s done to himself.

Coda: Now here is the REAL WORLD. LOOK AT THE PEOPLE. WATCH THIS BRIEF CLIP ALL THE WAY TO THE END. Canberra, Australia, Feb 7th, 2022