Americans are waking up to some uncomfortable truths. One of these is the fact that government bureaucrats and the corporate media regularly lie about what is going on in the world.

Millions of Americans now notice rapid price inflation and a good portion of them are pouring into physical bullion.

To illustrate just how much nonsense is baked into official inflation data, we are presenting three charts…

The first is a chart of the U.S. Dollar Index (DXY) over the past year. This one is a favorite of Wall Street and central bankers who want Americans to think the Federal Reserve Note is stable, or even getting stronger. 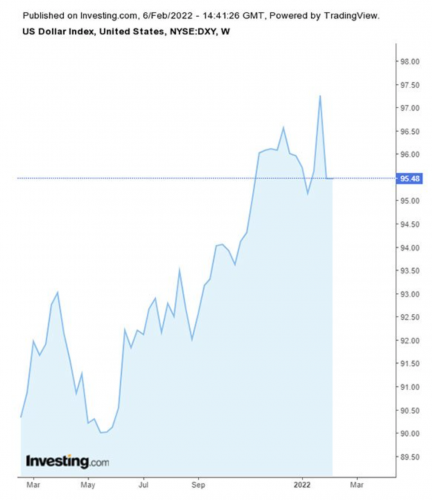 The DXY is very often cited in the financial press and incorporated in trading algorithms. Anyone who doesn’t dig deeper would have the impression the U.S. dollar got much stronger over the past year. They would, of course, be very wrong.

The trick is that the DXY index simply measures the dollar against other major unbacked fiat currencies around the world. It is not a measure of actual purchasing power. Not in the least!

Read More: Why the Federal Reserve Note’s Decline Is FAR Worse Than Reported