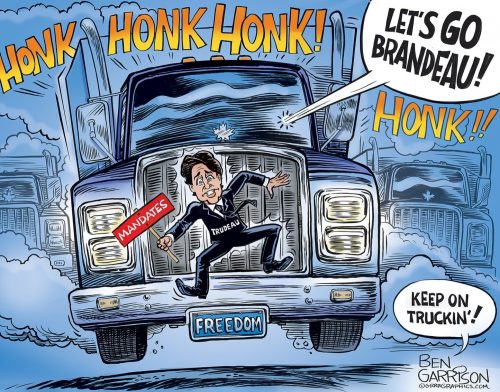 The Trucker Freedom Convoy to Ottawa Canada entered its second day today, with no signs that things were slowing down. As I have periodically checked in to live streaming throughout the day, I have heard people on the ground in Ottawa state things like: “They think we’re all going home now, but we’re just getting started!”

There was a stage set up in downtown Ottawa this morning where local pastors and others took turns addressing the crowds. The protests have been remarkably peaceful, so far, given the size of the crowds, which even the corporate media admits is in the “thousands” but is probably in the tens of thousands, if not hundreds of thousands. Some people on the ground are estimating up to 2 million.

And yet, the corporate media continues to characterize the protesters as “radicals” and “domestic terrorists” even suggesting that “Russian actors” are probably fueling the protests.

A lot of strange coverage by the media on this thing but this one wins the prize.pic.twitter.com/bLauTjI9NG

Justin Trudeau and his family have allegedly been removed from their home due to “security concerns.” (Source)

In some positive news, Scott Moe, the Premier of Saskatchewan, a Canadian province that borders the US, called for an end to vaccine mandates for the truckers.