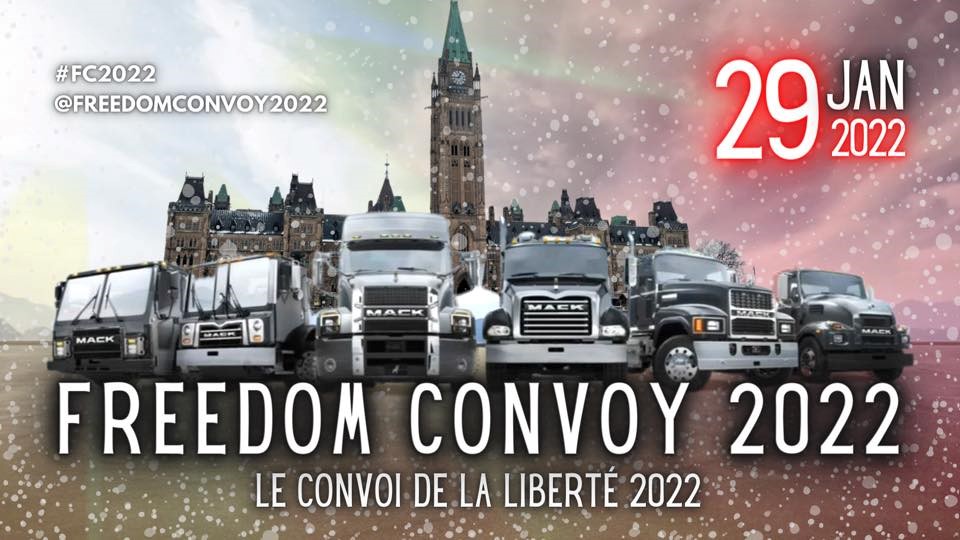 A ‘Freedom Convoy’ of trucks joined by thousands of demonstrators brought Ottawa to a virtual standstill for a second day on Sunday as they protested Canada‘s vaccine mandates, as other sympathetic truckers blocked a border highway into the United States.

The truckers say there is no ‘end date’ in sight and plan to stay in the capital ‘for as long as it takes’ and until the Canadian government flips and withdraws its policy on vaccine mandates.

The chaos clogged the capital’s downtown near parliament throughout the weekend and brought criticism from officials, including Ottawa’s mayor who said residents were ‘prisoners in their own home.’

But the demonstrators say they intend to stay and that their aim is to ‘create chaos’ and a ‘logistics nightmare’ for the Justin Trudeau’s government.

‘Right now, yeah, it’s really cold, but we hang in there, the days are going to get longer and we take this block party and put it into overdrive,’ BJ Dichter, one of the organizers of the Freedom Convoy, said at a press conference. ‘We’re in this one for the long haul. We don’t have a time limit.’

Read more: YEEEEESSS!!!!!! COME ON THE PEOPLE! – Canadian ‘Freedom Convoy’ truckers vow to stay put in Ottawa with tens of thousands of protesters pledging to continue to ‘create chaos’ until the government reverses its vaccine mandates – as vital route at border with US is blocked

You’ve heard of Hidin’ Biden. Our neighbor to the north, my native land, just outdid that with Cut-and-Run Justin.

With the pandemic in full swing, Prime Minister Justin Trudeau urged Canadians to show support for those helping to keep food on their tables. “While many of us are working from home, there are others who aren’t able to do that — like the truck drivers who are working day and night to make sure our shelves are stocked. So when you can, please #ThankATrucker for everything they’re doing and help them however you can,” he tweeted March 31, 2020.

Trudeau had a chance to thank thousands of them personally over the weekend, as the truckers who’ve assembled what they call the Freedom Convoy to protest COVID vaccine mandates and restrictions cruised into the capital. Instead, he fled — breaking isolation to do it.

On Saturday, the Trudeaus moved from their official Ottawa residence to the classic “undisclosed location.” Dad had started a five-day isolation Wednesday after one of his kids tested COVID-positive — but security accompanied the first family as he fled.

It was yet another example of how far the apple’s fallen from the tree. Taunted by striking mail-truck drivers in Montreal in 1970, then-PM Pierre Trudeau (whose son Justin was born the next year) gave it right back to them, snapping, “Mangez de la merde!”