We’ve kept our fingers on the pulse of supply chain issues for years now here at The Organic Prepper. Just last week we wrote about all of the impending supply chain issues which were plaguing America. Shortly after that piece was published we saw further edicts be given which banned particular Canadian truckers from coming across the border.

Say goodbye to your maple syrup.

And lo and behold, after massive inflation games, after tampering with the free market, after the deliberate creation of supply chain issues, now we have Washington DC running short on food. What’s the solution to these food shortages?

Why, telling people to not buy as much, of course. 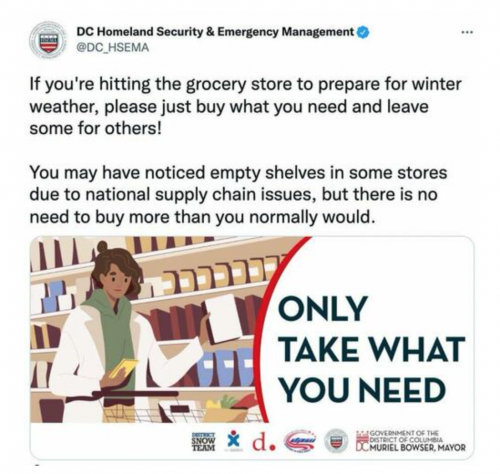 That’s exactly what DC Homeland Security and Emergency Management is now asking residents to do, as they face a problem with keeping their grocery store shelves stocked. Self-imposed rationing is the solution.

You have to love the notion that “there is no need to buy more than you normally would.” There’s just a nationwide supply chain issue, right? It surely won’t make it so that you won’t be able to buy what you need? And is there not a taint of “the government will take care of you here” as well? Aren’t these the same people who are deliberately causing these problems?