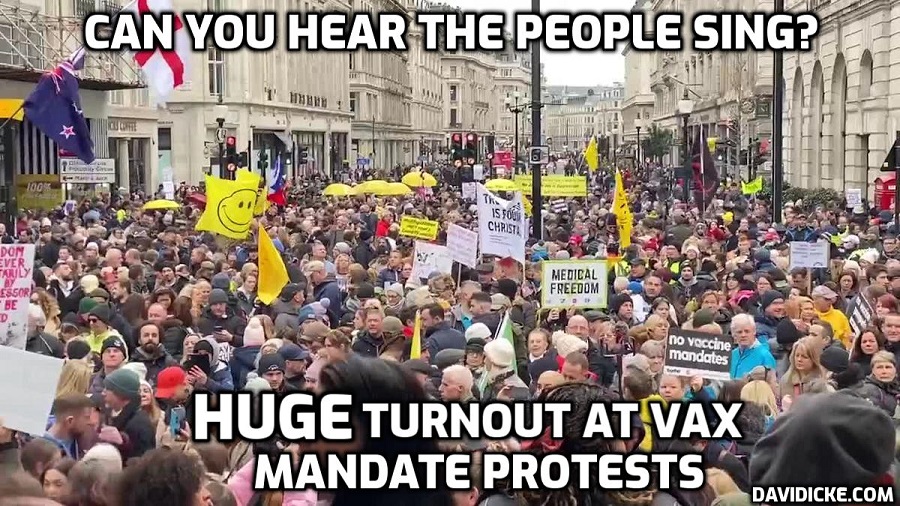 NHS workers joined anti-vaxxers across the country on Saturday as they protested against mandatory vaccine rules which will see those refusing the Covid jab sacked – with formal warnings of dismissal to be issued by health bosses from next month.

In London, dozens of health workers were seen throwing their scrubs at police officers outside Downing Street, while others laid down their uniforms in Trafalgar Square.

Notorious anti-vaxxer Piers Corbyn was among the crowds as they gathered outside BBC Broadcasting House, where one protestor donned a Squid Game mask and biohazard suit, complete with a blow-up syringe.

One Ambulance worker’s uniform was left hanging in Regent’s Park, with a message written on the back, reading: ‘Paramedic 9 years, clapping on Thursday, spat out on Monday.’

The so-called ‘freedom rallies’ were also held in Manchester, Birmingham, Leeds and Newcastle, where protestors held up signs reading: ‘No vaccine mandate’ and ‘heros to zeros – from clapping to sacking’.

Although the UK’s mortality rate has dropped massively as more people have been vaccinated, some anti-vaxx nurses maintain the life-saving jab is an ‘experimental drug’.

More than 80,000 NHS staff – six per cent of the workforce – remain unvaccinated despite repeated efforts to boost take-up.

It comes before all frontline workers who have not received a jab will be called into formal meetings from February 4 and given a warning that they face dismissal.

NHS England guidance says notices will then be issued from that day, with March 31 marking the end of the notice period.

Hundreds of people gathered in Birmingham this afternoon to protest against mandated COVIDvaccinations.

Congregating in Chamberlain Square, activists rallied as part of international action against a vaccination mandate that could see thousands of NHS staff lose their jobs.

The protesters, reportedly including nurses, doctors and other NHS staff, said they were challenging compulsory vaccinations which could see more than 70,000 NHS workers across the country lose their jobs due to being unvaccinated.

Billed as the “worldwide rally for freedom”, crowds converged in the city centre as part of global action, with mass protests also held in France, Italy, Austria and Germany. In the UK, similar events were held in London, Liverpool and Manchester.

Although the Government announced last week that Plan B COVID restrictions in England are being lifted, the protests went ahead with organisers claiming to be defending the NHS.

Saturday’s British demonstrations – including in Birmingham – were called by several organisations with varied anti-vaccination and anti-restrictions interests. Both vaccinated and non-vaccinated individuals were welcome to the protests.

Protesters swarmed the streets of Leeds today (Sat) to voice their disapproval of mandatory coronavirus vaccines for health workers.

Huge crowds gathered in Leeds shortly before 1pm on Saturday to take part in the national event.

The ‘World Wide Rally For Freedom’ march in Leeds began at the town hall where protesters were serenaded by a version of John Lennon’s ‘Imagine.’

NHS workers then went on to hang their work uniforms up at the entrance to the hall to symbolise what they described as being “hung out to dry” by the government.

One defiant Yorkshire nurse told Leeds Live she is planning to quit her job, which she has held for 30 years, instead of getting jabbed.

Others at the rally held signs depicting messages such as: “No forced Covid vaccine for NHS.”

Numerous attendees stood up to speak to the crowd over a tannoy system, with one woman referencing the ongoing ‘partygate’ scandal at 10 Downing Street.