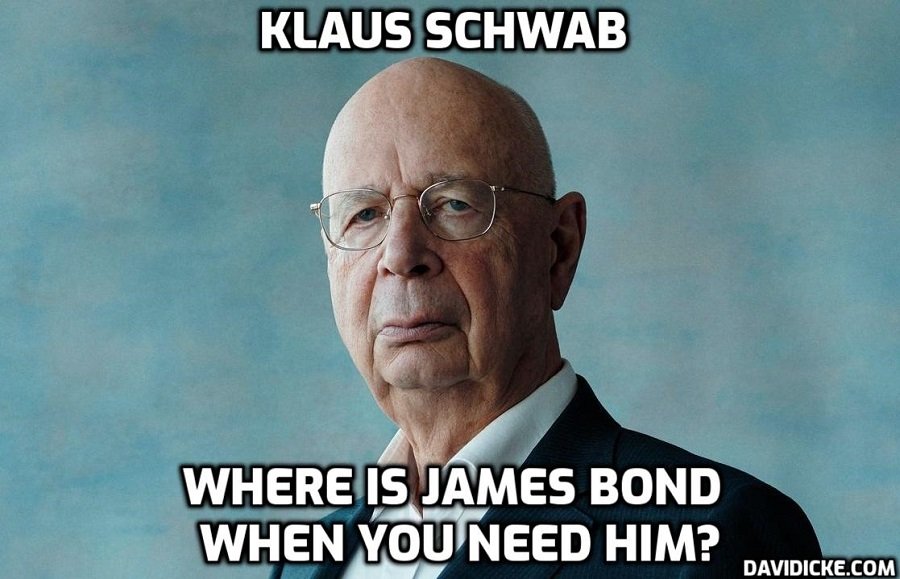 IN A secret bunker in the Swiss Alps sits Klaus Schwab, executive chairman of the WEF. He is studying a map, surrounded by his most devoted acolytes, who are standing to attention.

Reclining in a corner is Bill Gates, who silently observes the scene. He is stroking his cat, which rests on his lap viewing the proceedings with malice.

The German Chancellor Olaf Scholz bends down to point out to Schwab the parts of the globe that have fallen to the New World Order. The bespectacled leader is gratified to see that two members of the old Axis alliance are taking the lead in imposing totalitarian rule, and that parts of the British Commonwealth have also fallen into line.

He points at an anomaly on an island off the coast of Europe. ‘Ver is zis?’ he barks.

His supporters look down; they shuffle their feet. No one wants to give their Führer any bad news.

There is a harrumphing sound from a man skulking at the back of the room, and a deep gravelly voice suddenly declaims, ‘You snitch, Macron, you rotter, you absolute bounder!’

All eyes turn to a red-faced Boris Johnson, ashamed that his shortcomings have been exposed, and by, of all people, a Frenchie.

Schwab’s left hand begins to shake as he slowly removes his glasses. Some of his other followers, including Ardern, Morrison, Trudeau, Rutte, Sturgeon, Draghi, Drakeford and Nehammer, exchange apprehensive glances, knowing their leader is about to embark on one of his infamous rants.

Schwab begins to rise from his desk. In struggling to contain his rage he snaps his pencil and slams the broken pieces on to the map.

Ardern and Sturgeon look at each other and quietly begin to sob.

After an interminable pause, Schwab launches his tirade.

‘Gott in Himmel! You dummkopf, Johnson. Your hair is ridiculous, you haven’t got a decent suit and you can’t even arrange a cheese and wine party without messing up. You viv your mumbo jumbo and schoolboy Greek, and don’t get me started on zat gormless eierkopf Javid, he’s even more of a dummkopf than ze idiot Hancock. If a potato head like Drakeford and a troll like Krankie can get their sheep in order, why can’t you? Morrison and Nehammer have introduced concentration camps; Draghi is starving ze troublemakers, and Trudeau has imprisoned his entire population; but you – you can’t even get ze kids to keep their ridiculous compliance masks on! I vill tell you ziss, my friend, if you do not get your act together you vill be gone. Do you understand? Gone! How are ve supposed to reduce ze vorld population, save ze planet and make everyone happy ven you continue viv your clown act, you ramshackle buffoon!’

Read More – A rollicking for our beloved leader