A poll conducted by Good Morning Britain on Twitter (yet to be deleted) has revealed that 9 in 10 people in the UK oppose the Government enforcing yet another lockdown in response to the alleged Covid-19 Omicron variant, highlighting that YouGov Poll’s clearly cannot be trusted. 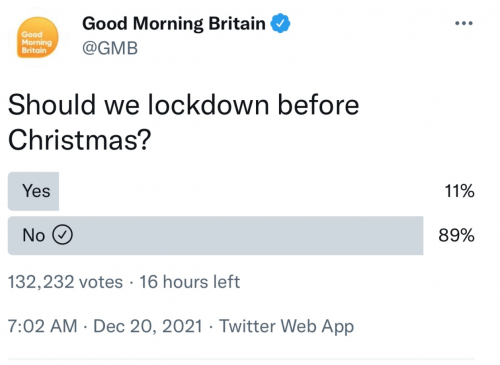 Good Morning Britain (GMB) posted the poll to Twitter at 07:02 am on Monday 20th December 2021, and asked “Should we lockdown before Christmas?”.

As of 14:38 on the same date the poll has received over 132,000 responses with 89% / 9 in every 10 people voting ‘No’ and making it very clear the people of the United Kingdom are not in favour of another Draconian lockdown because of the casedemic of the rebranded common cold, now dubbed Omicron.

Whilst the poll allegedly has 16 hours left to run at the time of writing we felt it was crucial to record and publish the results so far due to Good Morning Britain’s tack record of deleting poll’s when they do not get the answer they or their resident “Doctor” (Dr Hilary) were looking for.

On the 7th December GMB posted a poll asking “With Omicron cases doubling every two days, is it time to make vaccines mandatory?”.