If you’re tired of censorship, cancel culture, and the erosion of civil liberties subscribe to Reclaim The Net.

Twitter temporarily suspended Jon Schweppe, the director of American Principles Project (APP), for encouraging governors to support legislation that would ban the chemical castration of kids with gender dysphoria. Twitter claimed that the tweet violated its rules against hateful conduct.

APP is a pro-family think tank. Its director, Jon Schweppe, took to Twitter to applaud South Dakota’s Gov. Kristi Noem for pressing the state lawmakers to pass a law that will restrict the participation of trans individuals in female sports at the K-12 and collegiate levels.

Shweppe wrote: “Now we hope that governors will likewise be emboldened to continue the fight against the evil gender ideology being forced on America’s children by joining Arkansas and Tennessee in banning the chemical castration and surgical mutilation of minors suffering from gender dysphoria.” 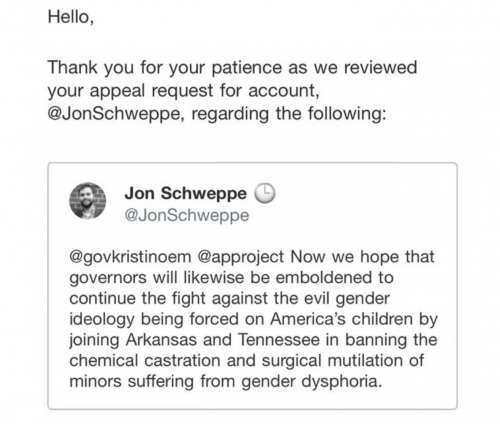