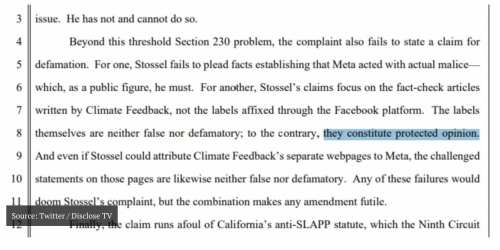 Meta Platforms, formerly known as Facebook, has admitted in a court filing that its fact checks are merely “protected opinions.”  The court filing was entered in response to a lawsuit filed by the Libertarian pundit John Stossel, who claimed that one of Facebook’s “fact checks” inserted on a video defamed him and was misleading.

In response, Facebook argued that the so-called “fact check” was actually an “opinion” rather than an actual check and statement of the facts. Opinions are protected from libel accusations, releasing the person or entity that made the statements from liability. On the other hand, statements labeled as fact make the person or entity making them subject to a libel lawsuit for defamation.

Whatever decision is made by the court, the filing and the lawsuit are a public relations disaster for Meta Platforms. The statement in the court filing that the so-called “fact checks” are nothing but “protected opinions” places Facebook in a precarious position.

A problem for Meta Platforms

If the court doesn’t agree with the claim made by Meta Platforms’ attorneys, then the company is liable for libel and defamation of character. On the other hand, if the court does accept their claim, then it indicates that Meta Platforms has long been misleading its users by claiming that its fact checks were actual checks of the facts rather than someone’s opinion.

Read More: Facebook asserts in a court filing that ‘fact checks’ created by third-party organizations and used to remove content or to suspend users are nothing more than ‘protected opinions’