An internal report from within the US Customs and Border Protection agency suggests that more than half the border patrol workforce remains unvaccinated, and that if vaccine mandates are implemented it could leave just 8000 officers on duty.

The document, obtained by Fox News, notes that 48 percent of agents have not registered their vaccination status, and of the 52 percent who have done that, ten percent are unvaccinated.

Former chief operating officer of CBP Mark Morgan, who obtained the internal report, told Fox News that Biden’s vaccine mandate is “going to take an agency that’s already gone through an unbelievable catastrophic crisis on the southwest border and deplete its resources further.”

Morgan also provided a screenshot from the report showing tables of different scenarios of depletion within the CBP. 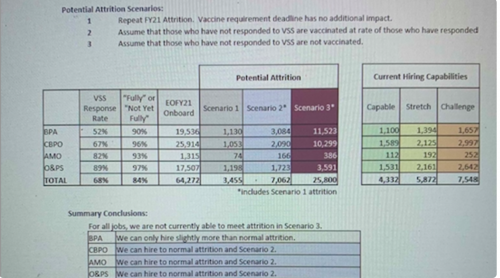 The screenshot highlights that “in the worst-case scenario, agents who have not reported their status have done so because they refuse to take the jab, and so they will be terminated (scenario 3). In that case, net attrition could exceed 11,523 agents, leaving a mere 8,013 border agents on patrol.”

Read More: More Than HALF Of Border Patrol Agents May Be FIRED For Being Unvaccinated