Volvo has said that emissions from the production of electric cars are far higher than a petrol equivalent, as it called on world leaders and energy providers to significantly boost investments in green energy to reduce the carbon footprint of plug-in models.

The Swedish car maker said that over a car’s lifetime the electric version will become greener overall, though this will only be achieved after covering between 30,000 and 68,400 miles – taking between four and nine years for the average UK motorist.

The claims were made to coincide with the COP26 climate summit taking place in Glasgow and as part of a revolutionary new transparency approach adopted by the brand, which includes publishing its latest ‘Life Cycle Assessment’ report for the pure-electric £57,400 C40 Recharge. 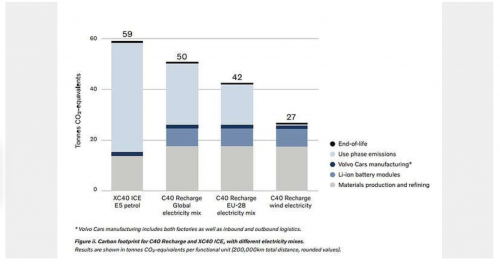 It shows that greenhouse gas emissions during production of the electric vehicle are nearly 70 per cent higher than a petrol model, which is mainly due to the carbon intensity of battery and steel production, as well as from the increased share of aluminium in the plug-in car.