The ONS announced on Friday that there were 44,474 deaths registered in England in September, which is about 4,000 more than in August, and 19.4% more than the five-year average.

19.4% is a non-trivial number, which makes this report slightly concerning. Last September, for example, the number of deaths registered in England was only 7% more than the five-year average. 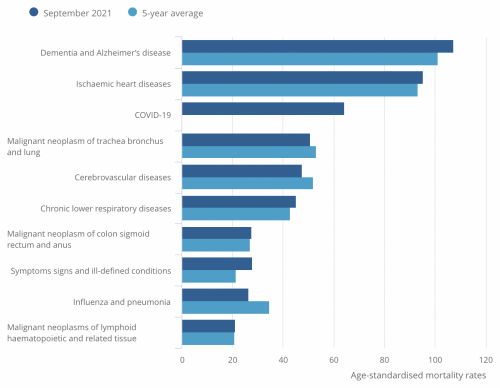 Notably, the age-standardised rates of death from dementia and Alzheimer’s, and from ischemic heart disease, were both above their five-year averages. Given that these are not respiratory conditions, the disparities are unlikely to be due to misattribution of deaths that were really caused by Covid.

The age-standardised rates of death from chronic lower respiratory diseases, from ill-defined conditions, and from colon and rectal cancers, were also above their five-year averages; although in the latter case, the disparity was negligible.

Read More: Are We Starting to See the Impact of Lockdown on Mortality?