Data released Friday by the Centers for Disease Control and Prevention (CDC) showed that between Dec. 14, 2020, and Oct. 15, 2021, a total of 818,044 adverse events following COVID vaccines were reported to the Vaccine Adverse Event Reporting System (VAERS).

The data included a total of 17,128 reports of deaths — an increase of 362 over the previous week, and a new report of a 12-year-old who died after getting the Pfizer vaccine.

There were 117,399 reports of serious injuries, including deaths, during the same time period — up 5,434 compared with the previous week. 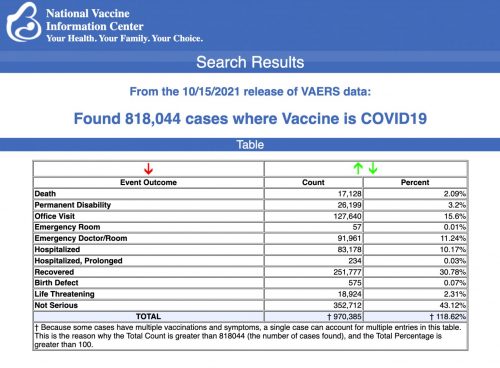 A peer-reviewed brief report published Oct. 7 in Acta Paedatrica describes a case of multisystem inflammatory syndrome in a previously healthy 17-year-old male who developed fever, vomiting, myalgia and chest pain five days after his second dose of the Pfizer-BioNTech vaccine.

According to the report, a previously healthy 17-year-old male developed fever, vomiting, myalgia and chest pain five days after his second dose of the Pfizer-BioNTech vaccine. After two days, he was admitted to the hospital with high levels of inflammatory parameters and multisystem involvement of the gastrointestinal tract, skin, central nervous system, kidneys, liver, coagulation, lungs and heart.

The patient developed myocarditis — inflammation that results from the body’s immune reaction to initial heart damage — with a severely reduced ejection fraction of 20%. He was then placed in the ICU for six days with norepinephrine infusion, high-flow oxygen therapy, steroids, intravenous immunoglobulin and antibiotics. He was discharged after 10 days of hospitalization.

“To our knowledge, this is the first reported case of an adolescent who developed fever and multisystem inflammation following an mRNA SARS-CoV-2 vaccination,” the authors said. “He fulfilled the diagnostic definition for a level-one definitive case of MIS-C after COVID-19 vaccination.”