Covid vaccines have been available for young English teenagers for almost a month but take-up rates are as low as 3.5%. Wokingham has jabbed the highest proportion of 12-15 year-olds in the country (just over 36%) but the figure for the whole of England (15%) lags far behind that of Scotland. MailOnline has the story.

The picture is very different in Scotland, where the rate stands at around 46.5%, with some areas of the country jabbing almost two thirds of their young teens.

The figures come off the back of rising concerns about a surge in coronavirus cases among young teens in England. 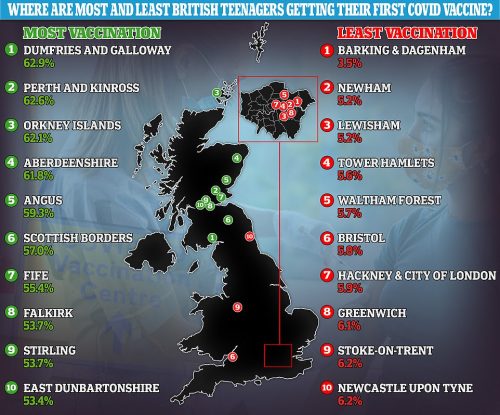 First doses of Covid vaccine started being rolled out to all the UK’s 3.2 million 12-15 year-olds on September 20th.

But the move was controversial, with concerns over a very rare risk of heart inflammation called myocarditis, estimated to affect 3-17 per million children under the age of 16 after their first Covid jab.

This risk increases to 12-24 per million children when they receive a second dose of the vaccine.

While in most cases the condition is mild, scientists do not know the long term implications. …

More than a third of England’s 149 upper tier local authorities (55) have vaccinated fewer than one in 10 young teens. The three worst areas for England and the U.K. are in London.

Read More: Child Vaccination Rates as Low as 3.5% In Areas of England