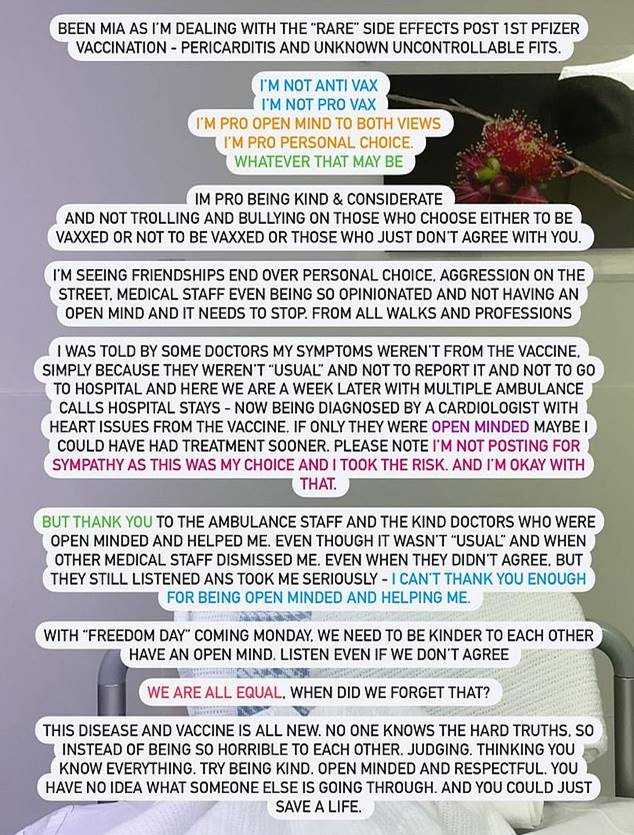 Former Bachelor star Monique Morley is the latest public figure to be hospitalised after getting the Pfizer covid vaccine.

On Friday, the 29-year-old revealed that over the past week she had been dealing with ‘rare side effects’ after getting her first vaccination. In a series of lengthy Instagram posts, the former lingerie designer told her followers that she experienced ‘pericarditis and unknown uncontrollable fits’ after her first jab.

Pericarditis is an inflammation of the sac-like tissue that surrounds the heart that holds it in place and helps it function.

‘I’m pro being kind and considerate, and not trolling and bullying on those who… just don’t agree with you.’ The reality TV said of her experience: ‘I was told by some doctors my symptoms weren’t from the vaccine, simply because they weren’t “usual” and not to report it and not to go to hospital.

‘Here we are a week later with multiple ambulance calls, hospital stays – now being diagnosed by a cardiologist with heart issues from the vaccine.

‘If only they were open minded maybe I could have had treatment sooner.’ The former Bachelor star wrote that she wasn’t looking for sympathy and understood that she took a risk by choosing to get the vaccine, and added: ‘I’m okay with that.’

Read More: Former Bachelor star Monique Morley is hospitalised with extremely rare heart complication ‘as a side effect of her first Pfizer jab’