COVID vax creatures have been seen

under the microscope by Dr. Carrie Madej, a courageous and very aware woman who has been highlighting the true agenda of transhumanism behind the COVID scamdemic for a while now. Madej first came to prominence last year with her videos exposing how hydrogel (a biosensor) would be an ingredient in the COVID gene-jection or fake-vaccine. Now, she has analyzed the vials of 2 major COVID vaccines – Moderna and Johnson & Johnson – and what she has seen is horrifying. As she explains in this interview with Stew Peters, she actually found some kind of spider-like being that appeared to move of its own volition. These COVID vax creatures lifted themselves up off the glass! Additionally, Madej found something that resembled a tiny computing system, which brings to mind Moderna’s marketing boasting that their mRNA creation was an “operating system” and “software of life.”

Madej explains what she saw under the microscope more than once in different vials and brands of COVID vaccine:

“They looked synthetic. And then there was one particular object or organism that had tentacles coming from it, and it was able to life itself up off the glass slide … it appeared to be self-aware, or be able to grow or move in space … this almost appears like it’s self-aware. It knows we’re watching it.” 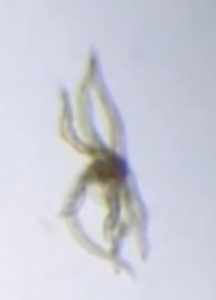 Madej also has photos of string- or thread-like substances found in the Moderna and J&J samples she studied. The threads look very similar, if not identical, to the threads that were discovered in some COVID masks, as I covered in an earlier article Strange Alive Worm-Like Fibers Found in Face Masks Produced for COVID.

The Theme of Self-Assembly

Madej at one point says:

“There was self-assembling going on. Things were growing.”

Whether it’s spider-like creatures or snake-like threads, there are common themes: these things move of their own volition, most probably intelligently, and they are capable of self-assembling. There are many mainstream scientific studies which have analyzed the ability of graphene oxide to self-assemble; one example of many is this study Self-assembly of graphene oxide at interfaces. This theme of self-assembly is very important to note as the Synthetic Agenda nanotech invasion advances. It’s about injecting humanity with substances that can then self-organize in order to hijack or take over the host organism. 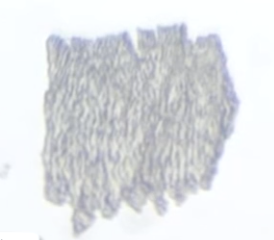 The COVID vax creatures are apparently not just limited to spiders and threads. Madej claims she saw something that resembled a nano computer system:

Stew Peters: “You mentioned something about an injectable computer system. What do you make of that?

Carrie Madej: “So when colors just appeared in this solution … all of sudden the most brilliant blue, the most brilliant yellow, the most brilliant purple appeared, and more and more and more over time … I’ve never anything been able to do that … It has to react with something. I didn’t know it could do that. And so I started to talk to nanotech engineers and genetic engineers, and they told me the only thing they knew of that could do that was a white light [from the microscope]. A white light over time will make the reaction on a superconducting material … like an injectable computing system. This is where the electronic components can now become visible under white light … So this is proof they are putting an operating system inside people. This happened in both the Moderna and the Johnson and Johnson samples that we observed. So we’re getting little pieces of evidence put together, one by one by one, but everything is pointing to the very ominous end point [that] this is the beginning or the advent of transhumanism. This is the beginning or advent of being able to have surveillance and spying done on people, just like Bill Gates said he’s doing right now in West Africa …”

Madej is referring to Gates’ partnership with GAVI and Mastercard to roll out a new biometric identity platform. This is the very same Mastercard that is happily partnering up with the WEF to push a CO2 monitoring credit card. In the context of operating systems, remember the creepy cryptocurrency patent ending in 666 belonging to Microsoft, the old company of Gates (who still has connections to it)? It was about setting up a behavioral reward system for certain types of body activity or action. This is a peek into the deeper NWO agenda, which is all about social engineering and conditioning people to act in certain ways via incentives and punishments like social credit systems. For those who missed it, here it is again:

Just recently Dr. Robert O. Young analyzed all 4 major brands of the COVID non-vaccine and found all sorts of dangerous things inside them, including graphene, nanometals and PEG. He also found parasites. Madej’s findings here vindicate his analysis. It is also important to remember the connection with hydrogel. In an earlier article on hydrogen Hydrogel Biosensor: Implantable Nanotech to be Used in COVID Vaccines? I talked about Profusa (backed by Bill Gates and the Pentagon) who is “pioneering tissue-integrating biosensors for continuous monitoring of body chemistries” meaning that they could detect your “entire body chemistry – your oxygen levels, your glucose levels, your hormone levels, your heart rate, your respiratory rate, your body temperature, with the (unstated) capability of expanding into areas of knowing your menstrual cycle (if you are a woman), your sex life, your emotions and more” and then transmit that information to authorities. In a later article Could Magnetic Hydrogel Explain the COVID Vax Magnet Phenomenon? I showed studies where scientists were remotely manipulating magnetic hydrogel inside the body.

None of this is accidental. All of these ingredients are there for a reason, so collectively we must keep researching what exactly is in these diabolical devices, what the intended effect is and how these non-vaccines go about achieving that effect.

Madej’s findings once again demonstrate beyond all doubt that we must be so careful not to allow these highly dangerous (and in many cases lethal) concoctions to be injected into our bodies or our children’s bodies, no matter what the cost. We simply have very little idea of what is actually in these gene-jection concoctions, the ultimate damage they could do long term and how they could alter our humanity forever. More investigation needs to be done. It is simply unfathomable that these substances are being forced on so many people around the world. The fact they are being so aggressively promoted is evidence indeed that we are living in an asylum or a horror movie. Those who value freedom must keep on exposing and presenting the truth to help humanity awaken from its slumber.

Makia Freeman is the editor of alternative media / independent news site The Freedom Articles, author of the book Cancer: The Lies, the Truth and the Solutions and senior researcher at ToolsForFreedom.com. Makia is on Steemit and Odysee/LBRY.