Institutions located in Switzerland have received US$13,1 billion from the Bill & Melinda Gates Foundation (“BMGF”) since 1998.  There are just seven institutions which received 96% of it, a combined US$12,6 billion.

A list of all institutions based in Switzerland and the amounts they have received, and/or has been committed, from BMGF is below.  The institutions which make up 96% of the total funding are highlighted in grey.

In a previous article we commented on GAVI and in this article we will comment on the World Health Organisation and, a smaller grantee, The New Humanitarian.

BMGF has paid or committed US$3,4 billion to the WHO based in Switzerland.  Additional funds have been committed to WHO offices in other nations.  In total BMGF has committed and/or paid US$4,1 billion to WHO worldwide since 1998. 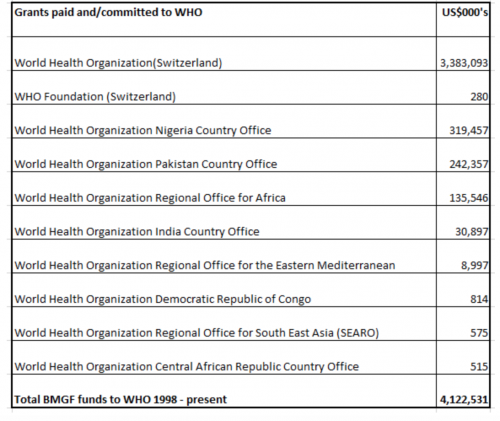 To put BMGF’s funding into context we compared their contributions to other WHO contributors for the year 2019.  The annex to the WHO’s financial statements, “Voluntary contributions by fund and contributor,” is available to download from their website HERE.  We searched WHO’s list for contributions greater than US$100 million without taking into consideration contributors’ affiliates which may also be included on the list.  There are seven contributors totalling US$1,4 billion, representing 57% of WHO’s total US$2,4 billion contributions received.  BMGF is the third largest contributor after the United States and GAVI.

Read More: The Gates Foundation Has Funded Swiss Institutions US$13 Billion With US$4 Billion Going To WHO

Where climate fascism is going ... Land may be sei...