The NHS is currently in the process of shooting various TV adverts as well as hiring actors to play Covid-19 patients and care home residents, meaning they are spending millions of pounds of tax-payers money on propaganda rather than care, despite a backlog of patients feared to be as high as twelve million people.

Adverts posted to the ‘Talent Talks’ site, which is a casting agency for various tv programmes and adverts, show that the NHS has been looking for a variety of actors to play several different roles including hospital patients, and care home residents, as well as to play out scenes which include bus journeys and partying in night clubs.

Each actor is to be paid around £120 per day and will be Covid tested upon arrival, according to the ads. Some of the scenes have already been shot, whilst others are taking place on September 24th. 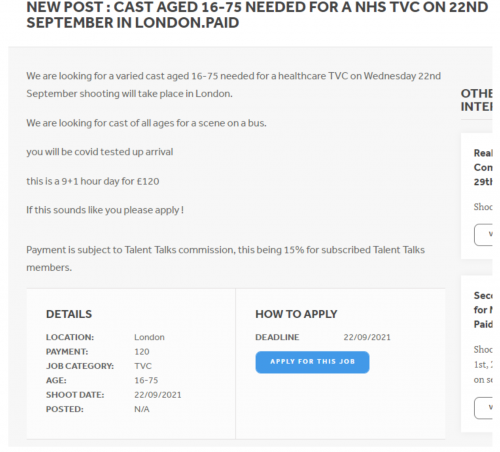