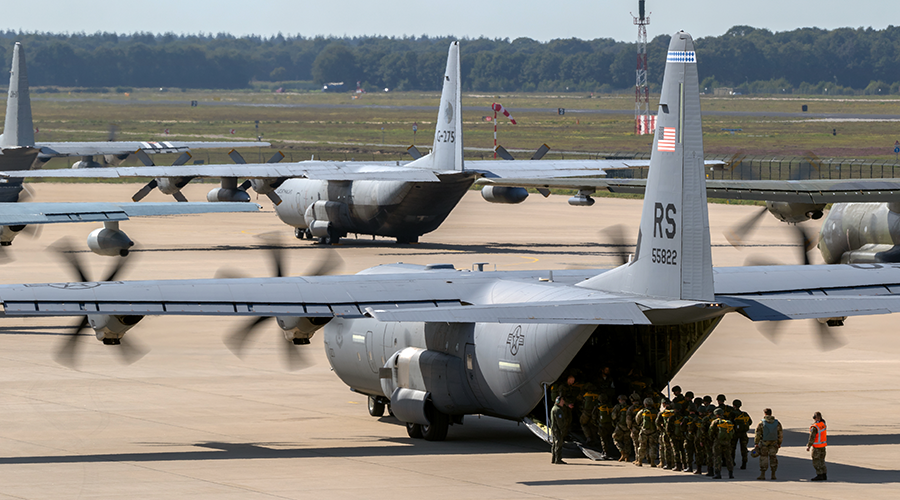 Remarkable new photos show the scale of the U.S. operations at Ramstein Air Base in Germany, as thousands of Afghans evacuated from Kabul are processed for their journey on to the United States.

The base, in south west Germany, has turned one of its two runways – which are both around two miles long – into an enormous tent city to provide living quarters for the tens of thousands of Afghans who have been evacuated there.

Those tents – which have been photographed from the air to show the sheer scale of the evacuation operation, are split into pods to give their occupants’ privacy, with hundreds of porta potties also visible along the edges of the air strip.

Only men sleep in the tents, with women and children housed separately in hangars normally used to store military aircraft at the base, which is run jointly by the US Air Force and Army.

About a fifth of all people evacuated by the U.S. from Kabul were brought to Ramstein, 100 miles south west of Frankfurt. The rest went mainly to Qatar and Kuwait, with some traveling via Italy and Spain.

Those evacuees then fly through Philadelphia or Washington Dulles airports for resettling in the United States – with most of those flying out unaware of where their final destination will be.

At the time, Brigadier General Joshua Olson, commander of the 86th Airlift Wing and Ramstein’s installation commander, said that the base could hold 5,000 evacuees. Two weeks later, it is housing nearly three times as many: as of September 1, almost 12,000 evacuees had left the base, while another 14,900 remained.

Since August 20, about 106 planes have landed there – mostly the C-17 jets which have become synonymous with the Kabul airlift.

Read More: Astonishing photos show how US military has turned a two-mile RUNWAY at Ramstein Air Base in Germany into tent city to house thousands of Afghan evacuees